Check your mailbox: Galaxy Note 4 already arriving on doorsteps [From the Forums] 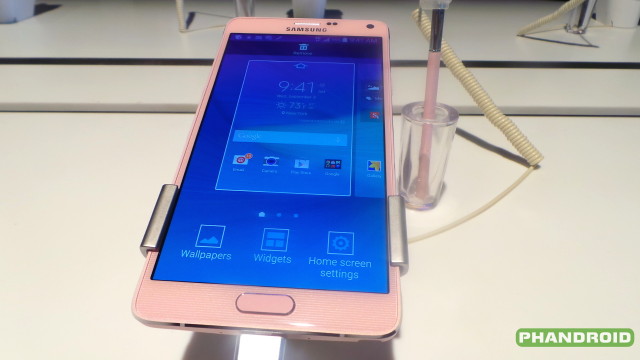 If you’re a T-Mobile customer who has pre-ordered their version of the Samsung Galaxy Note 4 you’ll definitely want to zoom over to your email inbox right now. Folks over at AndroidForums.com are reportedly receiving notices that the device has shipped, with some slated to arrive ahead of the device’s Friday launch date.

A couple of lucky customers have reportedly already received their units as early as yesterday. It certainly wouldn’t be hard to believe that they’ve gotten devices early considering T-Mobile is keen on shipping orders almost as soon as they’re ready to go out the door (they told Xperia Z3 pre-orderers that they might receive their shipments early, as well).

Folks are already beginning to share their impressions of the phone after the little time they’ve had with it. Lestat897 says the device looks even nicer than the Note 3 in terms of its faux leather backplate. The lack of fake stitching seems to add to its appeal and make for a much cleaner look, something we most certainly don’t have a program agreeing with. The user also mentioned that the small gap Samsung warns about really isn’t noticeable and they don’t anticipate it being the cause of any issues.

You can head to the thread over at AndroidForums.com where the generous user is taking on any and all questions. Be sure to make an account if you don’t already and get those questions rolling in. Let us know below if you’ve received your shipment or a shipment notice.