Here’s another data point to consider amid all this supply chain chatter about just how Apple is managing production of its new iPhone 5c and iPhone 5s.

Société Generale analyst Andy Perkins on Monday upgraded his rating on Apple’s shares to “buy” from “hold.” His rationale for doing so: Hon Hai and Pegatron, two of Apple’s iPhone manufacturing partners, charted a 20 percent year-over-year increase in sales during September. And at the same time, the value of handsets exported from China, where most of those companies’ iPhone facilities are located, rose 30 percent. 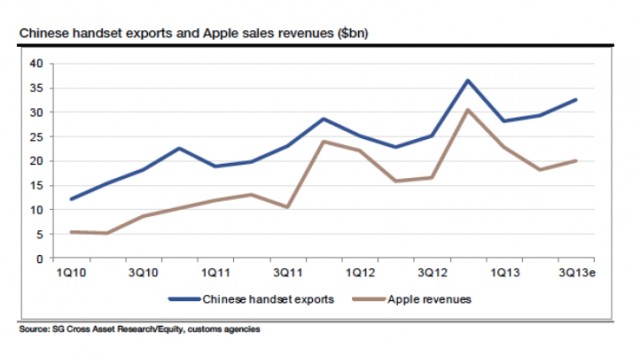 “We believe that this signals an impressive start for the manufacture of the new handsets,” Perkins said in a note to clients. “Additionally, Chinese September export data shows handset value up 30 percent year-over-year. As there has historically been a close correlation between Apple iPhone revenues and Chinese export value, we believe that this also bodes well for Apple’s third quarter results.”

With that in mind, Perkins raised his target on Apple shares to $575, arguing for “strong rises” in sales of the company’s new iPhones. “For now we believe that the momentum is with Apple, especially its new 5s model,” he wrote.