Code found on official Android site suggests we might soon get a countdown to Nexus 5 and 4.4 KitKat

Both Google and Kit Kat have been having a good ‘ol time, sitting back, watching the Android blogs hypebeast the heck out of the impending announcement (and release) of Android 4.4 KitKat. We’ve already highlighted some of the best the release date/announcement guesses the internet has to offer in a post earlier this afternoon. 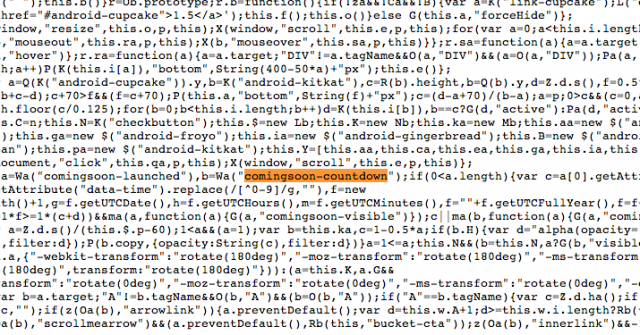 While Android fans everywhere continue racking their brains, we might be able to rest a little easier knowing the announcement likely wont be blindsiding any of us. In fact, digging through the HTML code inside the official Android KitKat page, yielded a JavaScript code for “kitkat.min.js”. Inside that code, it’s seemingly spelled out clear as day: “comingsoon-countdown”.

What does it mean? Well, it looks as if the official Android 4.4 KitKat homepage will soon feature some sort of countdown timer, counting down the seconds until the official worldwide reveal. All that’s left now is for Google to plug in a date, then the countdown can officially begin.

Because we’ll all know ahead of time when Google plans to officially unveil Android 4.4, it’s extremely unlikely that an announcement will happen out of the blue and without warning (dismissing claims that 4.4 could be announced today, tomorrow, or soon after that).

Guess we can still conjecture as to when that will finally happen, but we hope this gives some of you out there a little more peace of mind. We want it just as bad as anyone, and nobody likes being toyed with (you hear that, Kit Kat?).