Comparing the Galaxy Nexus to the Nexus S

We were looking at the leaked Galaxy Nexus specifications this afternoon and wanted to see how they stack up to last year's Nexus S handset.  Is it really that big of a difference?  Does it move the Android platform and mobile landscape forward with small steps or is it a giant leap?  Well, if the BGR stuff proves to be right (it should!), then we'll have to seriously consider making the switch to Verizon this fall.

Hit the break to see a side-by-side comparison of the two phones, based on the BGR leak and stuff pulled from Samsung and the Google phone page. Oh, and about that image.  We took the high-res shot floating around the internet and lined a Nexus S up for the sake of the post.  We know we're not 100% accurate with the scale but we feel like it gets the point across pretty well! 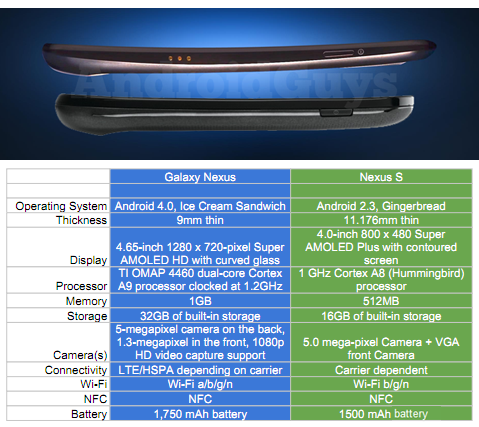 Comparing the Galaxy Nexus to the Nexus S originally appeared on AndroidGuys.