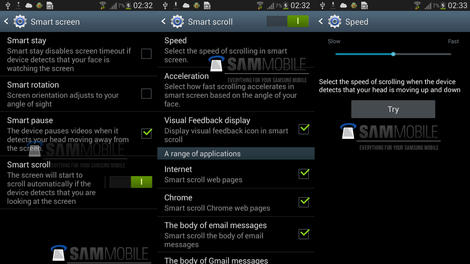 We've seen various reports suggesting that the Samsung Galaxy S4 will come with some fancy eye-tracking technology and now a handful of screenshots have appeared online suggesting this could well be the case.

Picked up by SamMobile, the snaps appear to show various panels in the settings menu of the Galaxy S4 for functions such as Smart scroll, Smart stay, Smart rotation and Smart pause.

Smart stay and rotation already appear on the Galaxy S3 and Galaxy Note 2, so it's the inclusion of Smart scroll and pause which has piqued the interest of the mobile world.

Who you looking at?

According to the screenshots, by turning on Smart scroll "the screen will start to scroll automatically if the device detects that you are looking at the screen".

Within the Smart scroll settings there are a variety of options allowing you to fine tune the experience to suit you, including tweaking the scrolling speed and selecting the applications you want to use it with.

The other new addition to Samsung's Smart screen suite is Smart pause, which will apparently pause video playback if you happen to take your eyes off the display.

While this all sounds very clever, we do wonder how much of a drain this new technology will have on the battery as the Galaxy S4 constantly tracks our every blink, wink and head twitch.

Of course we can't confirm the authenticity of these screenshots and they could have been very easily put together in Photoshop, but we'll know for sure next week when Samsung lifts the lid on the Galaxy S4 at its New York event.