Could an HTC One with an octa-core and 3GB of RAM be in the works? 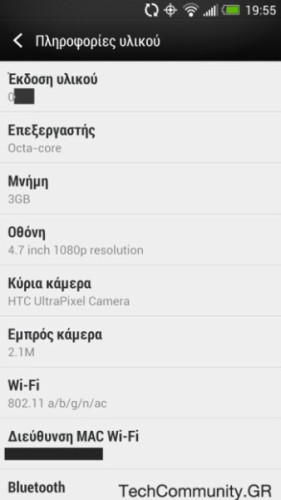 With Samsung already making octa-core devices, who is going to be next? The latest comes out of a Greek site called Tech Community. They have a screenshot from a device that is supposedly an HTC One. In the screenshot, under the processor field, you see “Octa-core”. Now some sites are saying this is fake because it just lists “Octa-core” and nothing else, but my DROID DNA has just “quadcore” under the same processor field. You will also notice 3GB under RAM, which would make it the first device from HTC to sport that much RAM.

The first question is what brand processor will this phone have? Samsung is the only company offering an octa-core chip at the moment, and they can’t make enough for themselves, so it’s highly unlikely they would offer any to HTC. Qualcomm isn’t planning on offering an octa-core anytime soon, so who? The only company that could possibly make it would be MediaTek. MediaTek has already announced they will have a true octa-core ready for manufacturers by the end of the year.

The next question is if this would be a followup to the One or just an update similar to what the One X+ was to the One X? Supposedly this is going to be an update, but last year the One X+ was announced on October 2. Now if this updated One does exist and is real, I highly doubt it will be ready to be announced by then, which means that any later date wouldn’t make sense. HTC will most likely unveil their followup to the One this February 2014, so a November or December announcement for an updated version would be too close. It’s also possible, HTC might alter their schedule next year. At this point all we have to go on is a screenshot that could easily be doctored, and it’s the first time we are hearing of this device. Will it be the last time?

Come comment on this article: Could an HTC One with an octa-core and 3GB of RAM be in the works?