Craving a Complex, daring high fantasy? The Dark Paladin by Rex Jameson is reminiscent of the emotional roller coaster and grit of Game of Thrones with the wonder and danger of the upside-down from Stranger Things!

The Dark Paladin (The Age of Magic Book 2) 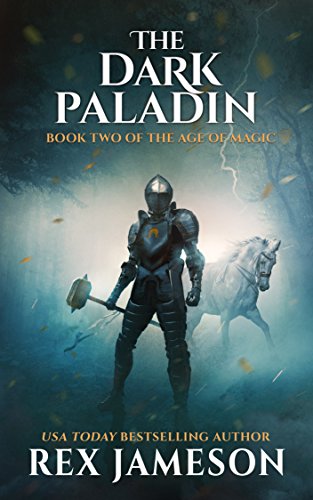 5.0 stars – 3 reviews
Kindle Price: 99 cents
Everyday Price:
Text-to-Speech and Lending: Enabled
Don’t have a Kindle? Get yours here.
Enjoy Rex Jameson’s Books? Tell us Why and Win a Free Book!
Here’s the set-up:

Craving a Complex, Daring High Fantasy? The Age of Magic series is reminiscent of the emotional roller coaster and grit of Game of Thrones with the wonder and danger of the upside-down from Stranger Things!

Sometimes, you have to fight fire with fire. Or demons with demons.

The paladins have a storied history, one tainted by a twisted sacrifice. To fight the demon lords intent on taking over their world, they had to make a deal with one.

Under this pact, paladin Cedric Arrington is forged into a weapon. Wearing his black armor to signal to all of Nirendia his dark allegiance, he is a man beset by shadow on a quest to send all demons back to the Abyss.

A demon lord named Orcus emerges from the underworld, and the foundations of the human kingdom of Surdel begin to fracture and weaken. Undead rise without the Necromancer. Demons pour out of Mount Godun at the heart of the tranquil realm, and no one but the paladins can smite the fiery creatures back to where they came from.

Cedric is joined by Prince Jayden of the dark elven Etyria Empire, who have fought their share of undead and evil creatures under their ancient, fallen cities for thousands of years. They search for hope. They search for a weapon capable of defeating a demon lord.

As King Aethis Eldenwald looks for answers to his demon and undead problem, old enemies from the south seek vengeance for recent wrongs. Meanwhile, in the capital Kingarth, the Necromancer Ashton Jeraldson is held hostage by a father grieving the loss of his famous son. When Ashton’s pleas for release fall on deaf ears, he is given a tantalizing choice: stay prisoner while the world burns or make his own deal with the darkness.

The post <p style="text-align:center;font-weight:bold;">Craving a Complex, daring high fantasy? <em>The Dark Paladin</em> by Rex Jameson is reminiscent of the emotional roller coaster and grit of Game of Thrones with the wonder and danger of the upside-down from Stranger Things!</p> appeared first on Kindle Fire on Kindle Nation Daily.