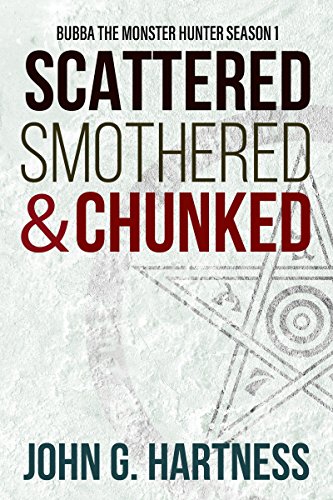 “Cross Larry the Cable Guy with The Dresden Files, and you have Bubba the Monster Hunter”

“Reminds me a bit of Ash from Army of Darkness”

“Hartness spins another tale of redneck mayhem full of his usual sarcastic humor.”

Scattered, Smothered and Chunked collects the entire first “season” of Bubba the Monster Hunter, from his first graveyard-splattering adventure in Voodoo Children to the stunning cliffhanger at the end of Final Countdown! Fans of the rollicking redneck monster hunter will find plenty of value in this massive collection of monsters, strippers, beer and bullets! This collection includes ten Bubba shorts, a Bubba prequel novella, and a bonus Black Knight Chronicles short story!

Voodoo Children – In this first Bubba the Monster Hunter story, everybody’s favorite redneck is chasing zombies through the hills of Tennessee. Follow Bubba through beer joints, strip clubs and graveyards as he and his best helper Bertha (a .50 Desert Eagle Pistol) make sure that what’s dead, stays dead.

Ballet of Blood – In Ballet of Blood, Bubba has to investigate a mysterious touring dance troupe that of course turns out to be more than he expected.
Bubba, backed up as always by the hilarious Skeeter, has to make do with his wits and what weapons he can find backstage at a theatre to get out of his most dangerous adventure yet.

Ho-Ho-Homicide – Everybody’s favorite redneck monster hunter goes undercover as a mall Santa to get to the bottom of a series of mysterious murders. Along the way he encounters snotty kids, annoying mothers, a smokin’ hot elf, the spirit of Christmas and a tribe of fairies that would rather make war than toys!

Tassels of Terror – Bubba’s back, and this time it’s personal! A mysterious fire destroyed a topless club in South Carolina, and Bubba must get to the bottom of the mystery and rescue a missing stripper before more bloodshed ensues.

Cat Scratch Fever – Bubba the Monster Hunter returns in a love story for the ages! Okay, not really. But there are big guns, bar fights, cheap women, cheaper beer, even cheaper one-liners, and a six-foot tiger taking a leak on a headstone. No really, that last part happened.

Hall & Goats – Bubba’s back, and this time he’s chasing a creature he can’t even pronounce! A mysterious creature called a chupacabra is attacking livestock in Florida, and Bubba’s on the case! But there’s someone else investigating this chimichanga, too! Who is it? Is she hot? Will Bubba get her naked before the story is over? And what the hell is Bubba doing hunting chalupas in a dry county?

Footloose – Bubba hunts a bigfoot in Virginia mountain country and finds so much more, including a hottie federal agent and a blast from his past that will change Bubba’s life forever. And probably not for the better!

Sixteens Tons – Bubba’s back and he’s another day older and deeper in debt! Well, not really, but he’s butt-deep in goblins and running low on bullets! Little green monsters have climbed out of a coal mine in West Virginia, and Bubba’s here to save the day.

Family Tradition – THIS is the story Bubba fans have been waiting for!
How did Bubba become a monster hunter?
What happened to his father?
What will he and Agent Amy have to deal with when they find him?
Join Bubba, Skeeter, Bertha and a lot more of the Bubba clan as we go deep into the past of everybody’s favorite XXXL-sized monster hunter. Plenty of action, booze and bloody fighting in this prelude to the Bubba the Monster Hunter series.

Final Countdown – In the startling climax to Bubba the Monster Hunter Season 1, Bubba returns home to take care of some unfinished business and rescue Uncle Father Joe from Bu