Darklings asks you to step out of the light 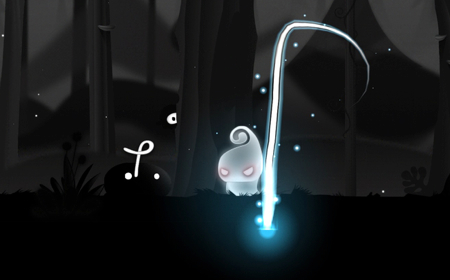 In Darklings, your adorable little character named Lum is on a quest to purge the world of darkness and restore the stars to the sky. You don't do this in the traditional "gamey" way -- by navigating worlds, hopping on enemy's heads, and destroying castles -- but instead, you simply possess your enemies to destroy them.

Taking over and eliminating an enemy is achieved by scribbling a pattern on your iPhone or iPad screen with your finger, and each enemy type has a different pattern assigned to it. The twist here is that you have no direct control over your character at all, as Lum simply stands in the spot of the last enemy you destroyed.

You'll spend time either swiping the same pattern over and over in quick succession to take out huge groups of the same enemy type, as well as scribbling many different patterns back-to-back, which truly tests your dexterity. Each enemy generates stars upon death, and you also have to swipe at those to gather them.

This might sound like a lot of work, but without having to worry about actually moving your character around the screen, the action is manageable. The game's recognition of touch gestures is spot on, and it's very forgiving, so if the design you sign on the screen is even remotely correct, it will usually give you the benefit of the doubt.

Darklings is gorgeous on the Retina display and the largely two-tone style helps all the enemies stand out, so you're never surprised by an enemy sneaking up on you. There are a ton of different unlocks to be obtained, including different playable character customizations and various Game Center achievements.

At US$0.99, Darklings is a bargain, and the in-app "Stars" purchases aren't emphasized or pushed whatsoever.

Darklings asks you to step out of the light originally appeared on Breaking Apple News, Tips and Reviews from The Unofficial Apple Weblog on Wed, 02 Apr 2014 20:00:00 EST. Please see our terms for use of feeds.