Day One Apps: The first apps we install on every new Android

Whenever I get a new Android device (which is often), there are a few things that I do right off the bat. Obviously, I sign in with my Google account(s), and skip all the other stuff, including the ‘restore from a previous device’ option. There’s just something about setting up a phone from scratch, that I love. From basic communications, to social media management, these are the first 15 apps that I download onto every new Android device I get.

When you work with a large team, you need a central “office” to communicate. Slack does this better than anyone else, and with various integrations, the Slack team has really created my favorite app to use across any operating system. Slack is usually the first, if not the second application that I install on every device. Slack makes it easy to talk to individuals on the team, as well as various groups that may or may not be created within the app. 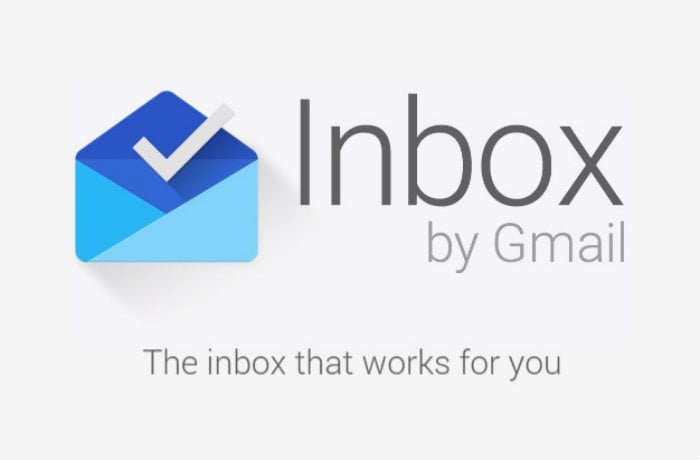 I have too many emails, and I have tried more than my fair share of different options for Inbox Zero management. When Google released Inbox, I jumped on the invite train, and waited impatiently for the invite to hit my email. Once it came, I was ecstatic and haven’t looked back. Being able to set actionable reminders to reply or reference emails, is an integral part of my day, and one that I can’t live without anymore. 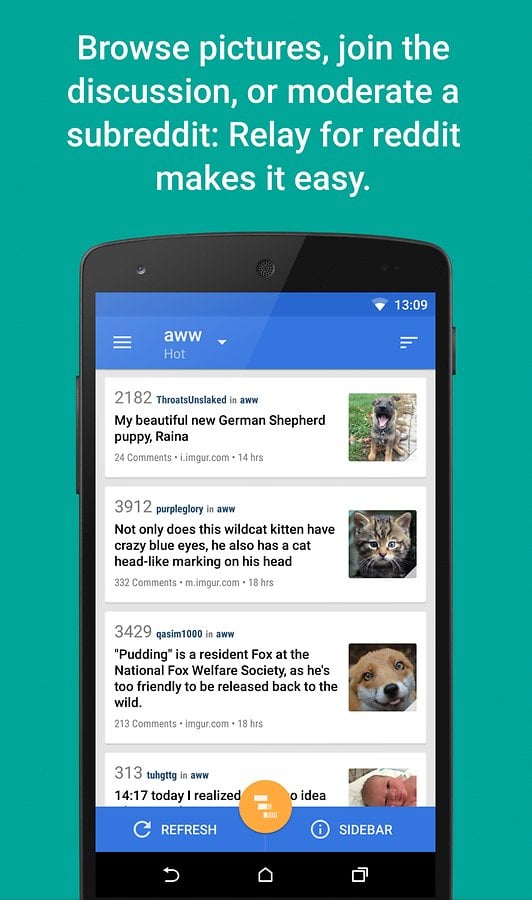 Time for the first guilty-pleasure app that I install on my devices. I have been a Reddit user for about 2 or 3 years, but have just gotten into Reddit within the last year or so. There are times that I jump between Relay and reddit is fun!, but I always come back to Relay. The customization, and overall interface is gorgeous and makes time-wasting a breeze.

I love being on the “cutting-edge” of technology, and there are some features that take FOREVER to be implemented into the standard version of Chrome. So once I found out that there was a Beta version of Chrome, that was available in the Play Store, I jumped on it, and haven’t looked back. What does the Chrome Beta do differently than the standard version? Nothing specifically, it’s just nice to get the cool features before the hit the masses. 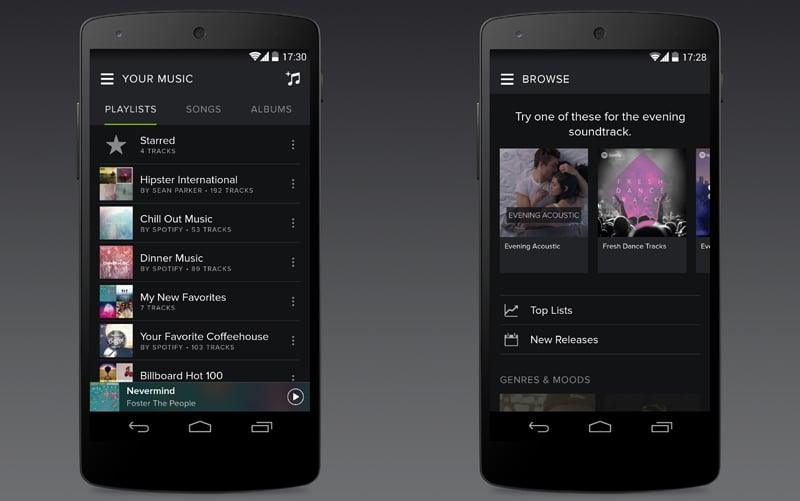 I need my music. Everywhere I go. And with my Premium Subscription, I have all the music I need whenever I need it. Spotify is arguably the greatest Streaming Music Service, and the only one that comes close is Google Play Music. However, I’ve been using Spotify for such a long time, that I’m used to the interface, and have all my playlists set up and downloaded for off-line usage. But don’t worry, I use Google Play Music too because I have some of my personal library uploaded to my account, so I’m not spurning GPM all the way. 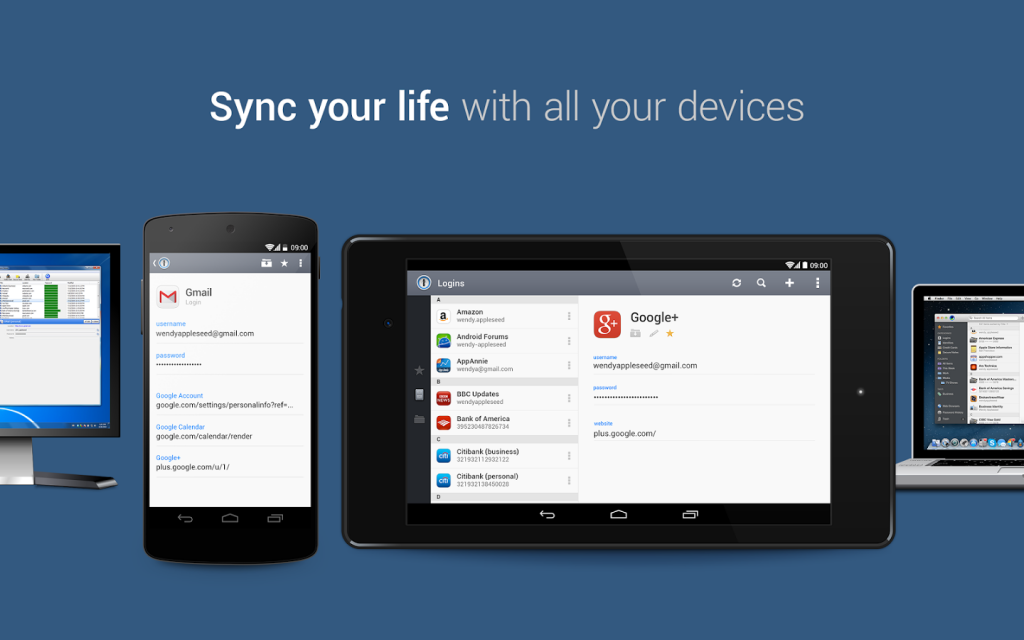 Gone are the days of using the same passwords for every site. Also gone are the days of using generic passwords, because that’s when bad things happen. I use 1Password instead of LastPass due to the fact that I’m an iOS user, and have just been on that train for too long to give it up. Dropbox syncing ensures that I’ll have my passwords saved across multiple platforms. Add in the fact that you can create secure passwords from within the app, and I’m good to go on the security front. (At least I hope.) 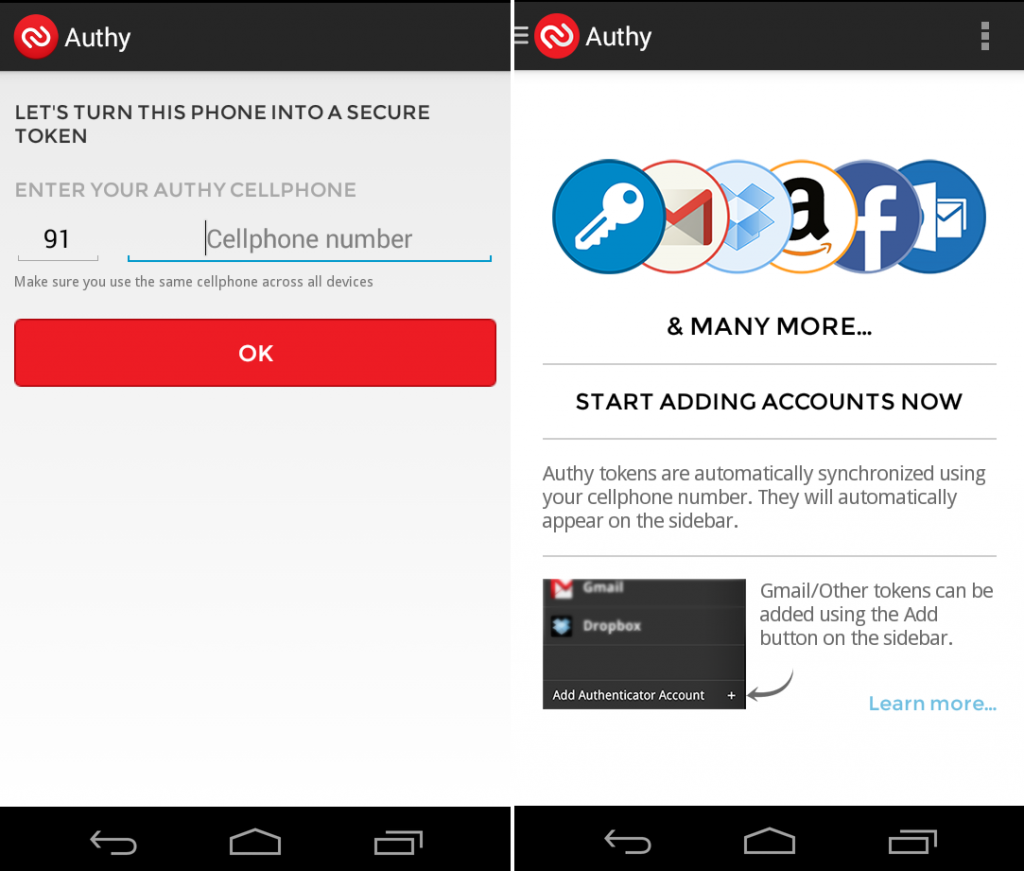 A few of my more important accounts, mainly e-mail, are protected by 2-step authentication. That’s where Authy comes in to help me access those accounts on the go. The widget never leaves my 2nd home page, and with a tap, I can get the access code to unlock my account. This is a great alternative to other options on the Play Store, and one I won’t leave home without. 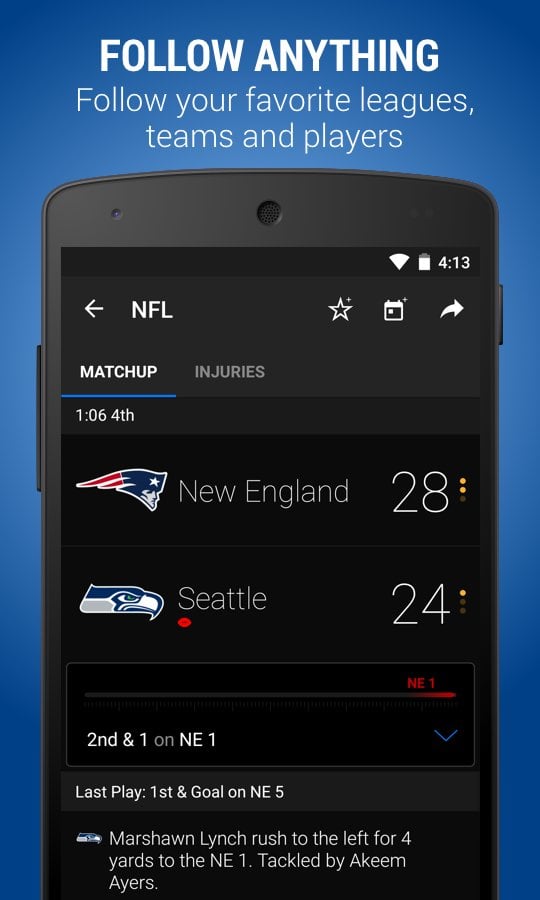 I’m a sports nut. Football, Baseball, Hockey, Basketball, you name it, I watch it. This is THE app to keep track of everything going on the sports world. From the wacky and unique to watching the highlights of the game you missed last night. You can even track your fantasy players to make sure that you don’t need to hit the waiver wire because your starting Wide Receiver missed practice. Customizable notifications are a great asset to have, and have pushed ESPN out of the top spot. 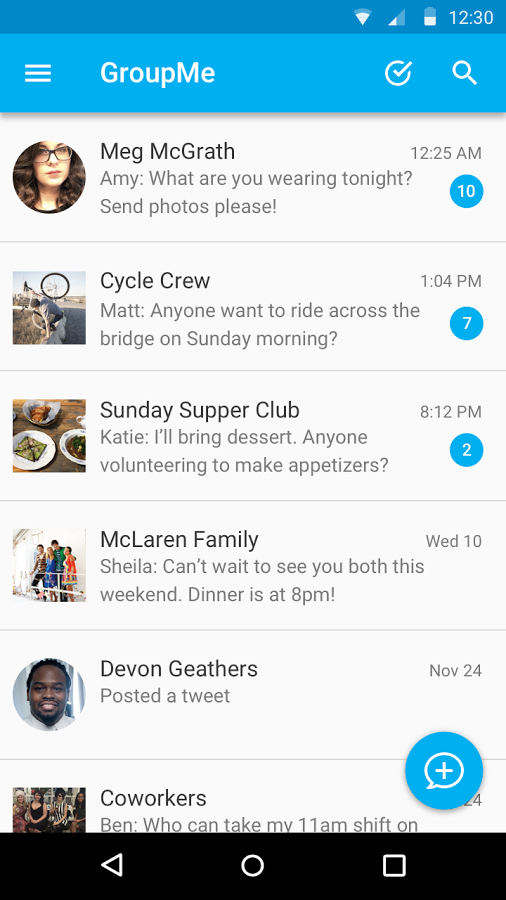 We all have friends who don’t have the same platform as us. Whether they are on Android or iOS, you’ll still need a way send group messages. GroupMe does this better than anything else that I’ve used before. Hangouts works just fine, but there’s no Giphy compatibility or anything like that. So GroupMe does the job perfectly, and then some.

I have sleeping issues. I can’t fall asleep when I need to, and I can almost never wake up at the right time. Sleep Cycle is an app that helps me get up in the morning, and keep track of my sleeping patterns to help figure out why I have the issues I do. Sleep Cycle tracks your various sleep-cycles, and determines the best time to wake you up dependent upon what cycle you’re currently in. It also has a syncing functionality so that I can keep my data synced across devices, and cross-platforms. It’s a great app, and one that really helps get me out of bed so I can make it to work on time.

We use Todoist to keep track of the various amount of tasks and projects that are on-going here at AndroidGuys. With the recent update that brought a complete redesign, it’s one of my favorite project management applications that I’ve ever used. The ability to add comments to tasks, as well as some IFTTT integration with Google Calendar, I can keep track of everything that needs to get done in my personal, and work, life. 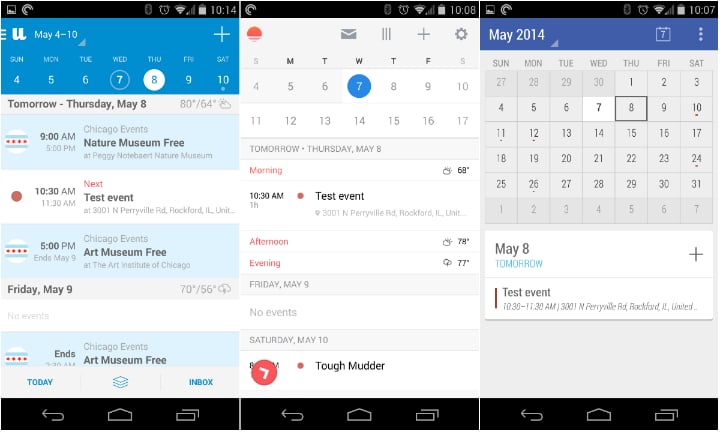 Speaking of Google Calendar, I’ve never really been a fan of the interface that Google has brought to our devices. So when Jack Underwood released this a few years ago, I jumped on it immediately. The widgets are extremely customizable, so I don’t even need to enter the application, unless I’m adding another calendar event. Jack does an amazing job at developing beautiful looking apps, and I ALWAYS use whatever he releases to the Play Store.

As with beta’s I love being able to try out the newest features before they hit the “mainstream”, and Nova is no different. I go through various launchers once a device is in my possession, but I always go back to Nova. I’ve been using it for so long, that I just can’t bring myself to truly use anything else for an extended period of time. That’s not a knock on the likes of Action Launcher or anything, but Nova is just home for me. 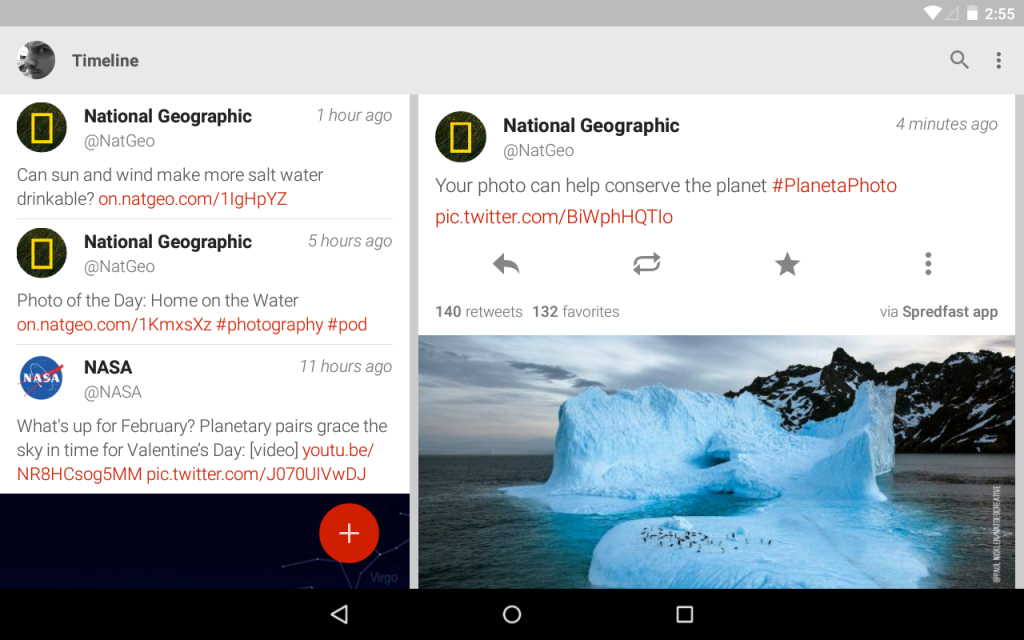 Admittedly, I don’t use Twitter as often as I used to, or as often as I should, but when I do, I want to have a great interface to use. Fenix fits the bill for me, and is the best option for a Twitter application on Android. At least for as long as Tweetbot is iOS only. The developer is fast about updates and bug fixes, and Fenix brings everything you need to keep track of your timeline. Fenix also seems to be the fan favorite, and one of the more popular social media apps on the Play Store.

As I stated above, whenever Jack Underwood releases a new application, I jump on board the hype train. Monospace Beta was the latest of Jack’s applications to hit my homescreen. Monospace is a very minimalistic text editor, and allows for basic input, as well as some various formatting styles. There’s also Dropbox sync for cross platform syncing, so I can keep all my notes and ramblings on multiple devices when I swap them out.

These are subject to change dependent upon my mood, and whether something comes out that performs a function better than what’s listed above. Drop us a line below, and let us know what the first applications are installed on your new devices.

The post Day One Apps: The first apps we install on every new Android appeared first on AndroidGuys.