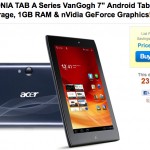 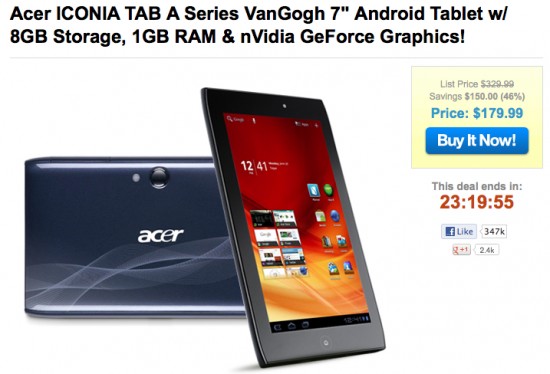 Alright, we got a handful of great deals for you tonight via the more popular daily deals sites around the net. Don’t want to wasted much time (in case they sell out) so let’s get straight to it. 1SaleADay is offering a refurbished 7-inch Acer Iconia Tab A100 for the rock bottom price of $180. Arguably better than an Amazon Kindle Fire, this is about $20 cheaper than you’d find that pseudo-Android running tablet and with an Android 4.0 upgrade coming down the pipeline, it only adds to the value. 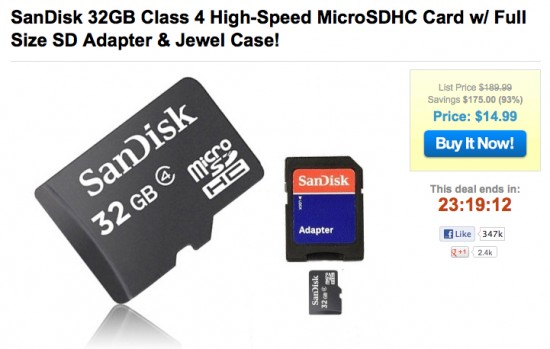 If you’re looking to add a little memory on top of the tab (or any device for that matter) 1SaleADay also has a 32GB class 4 micro SD card up for only $15. Not too shabby at all, and it even comes with a full sized SD adapter. More than likely this will go great in any device you have now but with SD cards seemingly going the way of the dinosaur ( HTC One X, Galaxy Nexus, Galaxy S III) these might not be as useful in the future. 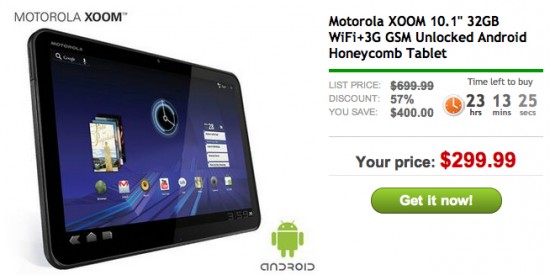 Moving on to DailySteals where they currently have a refurbished unlocked 3G version of the Motorola Xoom (32GB) for $300. Again, this is a great deal especially when considering the device plays nice with AT&T’s 3G bands but only T-Mobile’s 2G Edge network. All things considered, you could do a lot worse on a 10-inch tablet that will see an update to Android 4.0 Ice Cream Sandwich in the near future.

Finally, we have a 5,000mAh portable battery from New Trent. I’ve seen this little fella pop up from time-to-time in my searches on Amazon and almost pulled the trigger back when it $50. Reviews were generally favorable for the iFuel and anyone with an Android device will no doubt see the value in keeping your device charged up when away from an outlet. At $25, this is most certainly a steal. A steal that, just like for all the others, will only last another 22 hours or so. Anyone taking advantage of any of these offers?