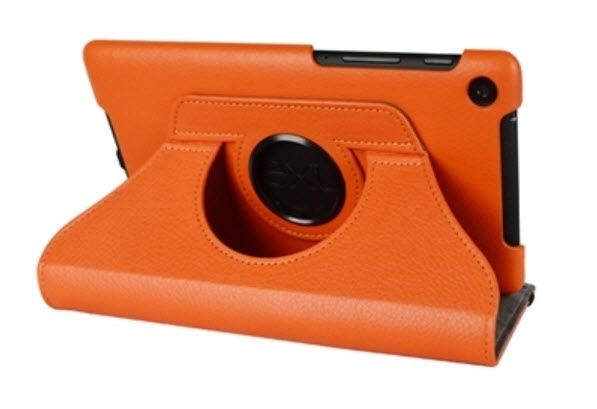 Tablets are über cheap these days. It seems as though just about every electronics company has them flying off the production lines. But even if you manage to pick up a cheap tablet, you still want to keep it protected -- no one wants to end up with a screen that is scratched to the point of being unusable, or a body that's smashed to smithereens. The need to protect is even greater if you have handed over a few hundred dollars / pounds for something from the Apple family, and there are all manner of cases to whet the appetite of those keen to keep things safe.

One such offering is the 360° Case from Everything Tablet (operating in the US and Canada as well as the UK) which features a folio-style wrap-around design. I took a look at the Nexus 7 model and my previously svelte 7 incher was transformed into something resembling a leather-bound personal organizer from the 80s. Such is the price one pays for protection, I guess.

At the moment Nexus 7 users have a rather limited choice when it comes to colors for the case. There's Black Carbon, with which it is all but impossible to go wrong, and then there is orange. And holy heck, is it orange! iPad users have a wider palette from which to make their selection -- Baby Blue, Baby Pink, Black Carbon, Gun Metal Grey, and Orange -- and just about the full gamut of Apple tablets is covered. The iPad 2, 3 and 4 cases will set you back £22.99 ($22.99), the iPad Air jumps to £29.99 ($29.99), the iPad Mini drops to £19.99 ($19.99), and the lower price is what Nexus 7 owners are expected to part with as well. The pricing is good, but yet again it is disappointing to see UK consumers getting worse deal, ultimately ending up paying a massive premium -- $22.99 equates to £13.63, for instance, and while there are state taxes to factor in, an extra £9.36 (or $15.79) is difficult to justify. Maybe the US and Canada is just getting a really great deal, but being in the UK I can’t help but feel like I'm getting the dirty end of the stick.

That minor rant out of the way, the case itself is pleasing to use, but not the best I've ever come across. The cover of the case is held in place with an elasticated band. A magnetic catch or other form of closing mechanism would have been preferable because there's huge potential for catching the strap on the content of a bag when the tablet is pulled out for use. Open it up and the smart cover activates the screen -- at least it does most of the time -- and the tablet can then be used in a number of ways. Hold the case in portrait mode and you can use your tablet in the case as if reading a book, but there is scope to fold the cover all the way round the back.

Flip round to landscape mode and you'll find a groove running along the front edge of the inside of the cover that can then house the bottom edge of the tablet. This is a great 'tent' style mode for watching movies or making use of a Bluetooth keyboard. But here's the interesting bit. The 360° part of the case's name stems from the rotatability of the portion that hold your tablet in place. It can rotate through a full 360°, but really it's just to allow you to switch between a hands-free portrait and landscape mode. The angle is a little shallow when flipped to the vertical position, but it is still more than usable.

The case feels robust and, apart from access to buttons and speakers, there are few exposed parts that could get scratched or damaged. I'm not sure how much rotating the case will stand for months or years to come, but the rotator cuff, including its off two-inch hole that make it look as though it has been blasted at close range with a firearm, is certainly a weak point.

While the 360° gives a generally decent viewing angle and will protect against bumps and scrapes, it also feels rather awkward to use, making the tablet experience more annoying than enjoyable -- and this is something no case should do.