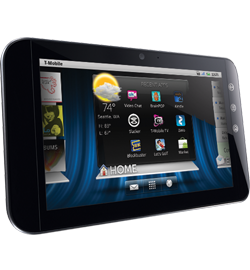 Dell is undoubtedly one of the leaders when talking about computers, but recently we noticed that Dell isn't interested anymore in the US mobile market. As of late, they seem to be launching their devices in mostly Asian markets (no not the one around the corner). Anyway, does anyone remember the Dell Streak 7? It's actually Dell's first ever Android powered tablet. The tablet comes with Android 2.3 along with Dell's Stage UI and word on the street is that users are starting to receive an Android 3.2 update over the air. Users have begun posting about it on the Dell forums and some are complaining that after updating, all their data was wiped. Others are stating they have had no problems with the update but there seems to be some apparent bugs and they are hoping for Dell to step up and fix them.

Now everyone is wondering when T-Mobile will be launching the update for their first 4G tablet, the Dell Streak 7? T-Mobile hasn't announced anything yet but I believe that it will be happening soon. Either way, I'd wait for Dell or T-Mobile to make an official announcement about the update before I went looking for it on my own. Has anyone outside the US received the update for their Streak 7? If yes, share your experience with us in the comment box below.