In Depth: iPhone 5 launch: what to expect 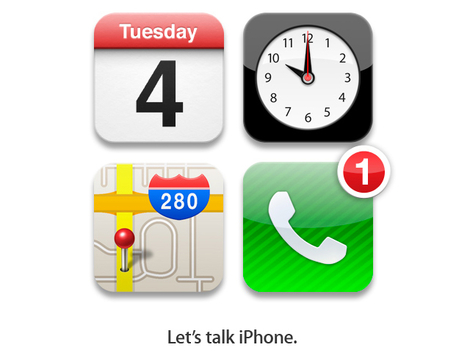 Since early this year there has been speculation that Apple would launch a new iPhone 5 during the latter half of 2011.

The precedent with previous Apple handsets is that they have been announced in January or June - but nothing happened with iPhone at Apple's June event; the Worldwide Developers Conference (WWDC).

Nothing, that is, apart from a whole new OS in iOS 5 and a cloud-based infrastructure to untether the whole iPhone ecosystem from the PC - that, of course, is iCloud.

Still, hardware was absent and such was the storm of iPhone 5 rumours before the event that Apple was forced to make it clear that WWDC would be about software.

So now we're on the day of Apple's iPhone press conference, what can we expect from the announcements?

Despite huge numbers of rumours that we're expecting both an iPhone 4S and iPhone 5, we believe we'll see one or the other launch. Why? Check out the invite. The green phone icon has a 1 by it and - we'll stick our neck out here - that means one phone. The reasoning is that the rest of the icons all mean something. Today's date, the PST local time of the press conference and finally the iPhone Maps logo that actually shows the location of Apple's Cupertino HQ where the press conference is taking place.

We're sticking with our original hunch - it'll be iPhone 5 - although the groundswell of information pointing to a rejigged iPhone 4S has been getting stronger each day, and our columnist Gary Marshall reckons we'll get the iPhone 4S, with evolutionary improvements rather than revolutionary ones.

If you're wondering when a new iPhone might launch, check out the latest rumours about the iPhone 5 release date.

It all kicks off at 6pm BST - that's 10am PST - and the main keynote announcement takes place in the Town Hall on Apple's campus. That's a downsizing from previous launches that have taken place at San Francisco's Moscone Center. Why the change? This is the first major launch of the post Steve Jobs era, and it could well be that new CEO Tim Cook would prefer to start off among friends.

Along with the rest of the UK media we'll be present at a UK broadcast of the event taking place at London's Covent Garden Apple Store. This is also lower key than for previous launches when all and sundry have been invited to locations such as BBC Television Centre and we're hearing that fewer press have been invited to both the US and UK events.

Also keep an eye on the TechRadar Twitter account (@techradar) for the event itself and we'll be covering the launch live on the site.

Hopefully we'll be able to get a hands on iPhone 5 review up after the announcement, and we'll be bringing you total coverage of the launch here on TechRadar including our first impressions of any new iPhone as well as the latest news on iOS 5 and iCloud - both of those services could launch any time from tonight to the iPhone 5 release date.

Tomorrow, we'll also be bringing you full analysis on the aftermath of the event, as well as assessing how Tim Cook got on during his first big public test since taking over.