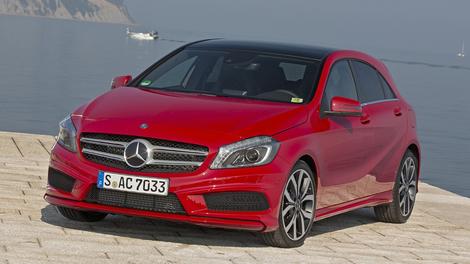 Mercedes' new A-Class hatchback is hoping to blow away BMW's 1 Series and the Audi A3 by taking smartphone in-car integration trend to a whole new level. Join TechRadar as we get hands on with Merc's new premium hatchback and its fancy iPhone-drvien features!

At first glance the new A-Class looks a lot more conventional, if a damn sight sexier and slinkier, than the outgoing model. Gone are the MPV-aping proportions and novel sandwich-floored construction.

Step inside, however, and you find innovation of a different kind – and frankly of a sort that you'll likely find more relevant in the real world than the old A-Class's novel but ultimately rather futile chassis engineering.

Check out our video walkthrough of the new system...

The big news is the arrival of a new iPhone integration app, or as Mercedes would have it, a "digital drivestyle" (geddit?!) app known as DriveKit Plus. The idea is to allow your iPhone to feed features, functionality and apps directly onto the A-Class's dash-mounted infotainment display. It's an idea we've seen before, most notably courtesy of MINI Connected. But Mercedes is taking things a step further.

The interface itself has a different look and feel from both iOS on the Apple iPhone and Mercedes own COMAND infotainment. That's no bad thing regards the latter, which has a rather patchy and dated appearance.

The whole thing is driven and run on the iPhone and requires an app installation on the handset. Once up and running, functionality is split into three main areas, Social, Media and Places. Everything is controlled via Mercedes' console-mounted input wheel. Despite the tablet-esque appearance of the screen, there is no touch functionality.

Our demo above video shows the system working in some detail, but here's a quick run down of the main features.

Media
You get full access to your iPhone's media library and playlists, as well as further features including Aupeo internet radio.

Places
This is navigation and other location based features. The navigation is provided by Garmin including IP traffic data (yay). Another interesting feature is Glympse, a real-time location sharing app via facebook or twitter. Glympse posts a link to a map showing location in real time, allowing people to see where without disturbing you.

UK pricing for DriveKit Plus hasn't been released, but we do know you'll need either the Audio 20 upgrade or the full COMAND Online option installed.

It's worth noting that you'll need to pony up for the full COMAND system in order to have the larger of the two LCD displays (as seen in our video). That's slightly galling and not a little confusing given that you end up with several features duplicated (including two different navigation systems).

So what are our impressions? It's certainly slick in operation and the most advanced system of its kind we've yet seen, trumping MINI Connected.

Plus points are full access to your iPhone's media library, some nicely executed social media functions and navigation with detail traffic info. If you have an iPhone you'll love it. If you have Android, not so much! For the record, an Android app with similar features is due next year.

On the other hand, the screen itself is fairly small and fairly low res. BMW's iDrive interface still has the edge for graphical quality, despite all the fancy OpenGL effects Mercedes' Palo Alto research bods have come up with.

Meanwhile, if you're wondering what the latest A-Class is like to drive, well, it's very, very good. Mercedes is aiming for sporty with the new model and for the most part, the Germans have nailed it.

The handling is very positive and responsive and both the petrol and diesel engine options give plenty of shove. Even more impressive is the car's grown-up gait. It's immensely refined and manages to combine agility with a big-car feel. Impressive.

The only major downside is the optional dual-clutch gearbox. Technically, it's flawless in operation. But thanks to conservative programming, it's reluctant to respond to inputs via the paddle shifts outside narrow parameters, which is frustrating in what is otherwise an surprisingly fun car to drive. We're also not convinced the new A-Class can live with Audi's latest A3 when it comes to cabin quality.

Oh, and one final note – voice control via's Apple's Siri interface courtesy of a steering wheel mounted button is due later this year.