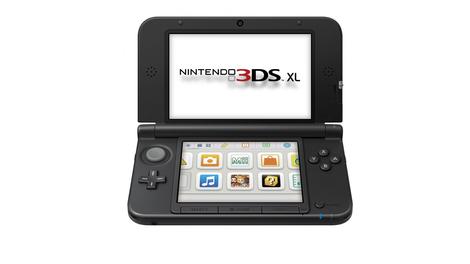 Everybody who's used a Nintendo 3DS has probably thought the same thing: no, not "Ugh! That 3D effect has made me feel faintly nauseous!".

We mean "wouldn't it be great if it were bigger?" Nintendo has come up with the perfect answer: a 3DS that's bigger, with a better battery so the new screens don't cut play time down to twenty seconds

So what else does the 3DS XL have up its silicon sleeve, and how much will you have to pay for one when it goes on sale in July?

The top screen and the bottom screen of the 3DS XL have been increased considerably from the ones on the 3DS: the top screen has grown from 3.58 inches to 4.88 inches, and the bottom one is up from 3.02 inches to 4.18 inches. As you might expect that adds a fair bit of weight to the device: it's 46% heavier than before, and the weight is up from 235g to 336g. The Nintendo 3DS XL dimensions are 134 x 74 x 21mm. As before there's glasses-free 3D with an slider to adjust the 3D effect or turn it off completely.

Although the 3DS XL screens are bigger, the resolution is the same

The Nintendo 3DS XL has much better battery life

The screens aren't the only things Nintendo has beefed up: the battery's better too, so those big screens won't mean big battery disappointments. Nintendo says the 3DS XL battery life will be between three and six-and-a-half hours when you're playing 3DS games, and if you're playing original DS games you can expect between five and eight hours of play time.

The Nintendo 3DS XL is blue, except when it isn't

The 3DS XL will come in three different colour combinations: blue and black, silver and black or red and black.

The 3DS XL specifications are similar to the 3DS

As with the 3DS there's a single analogue control stick: as Joe Svetlik writes: "if you want to play titles like Monster Hunter and Metal Gear Solid: Snake Eater 3D, you'll probably need a modified version of the Circle Pad Pro accessory. Nintendo hasn't said how this will work, so expect an announcement soon." The existing Circle Pad Pro won't be compatible with the 3DS XL.

Both cameras are unchanged at 0.3 megapixels.

Japanese customers will know the 3DS XL as the 3DS LL. Does LL stand for "ladies love", as it does in LL Cool J's name? Sadly not.

The 3DS XL gives you storage but takes away the charger

Where the original 3DS came with a 2GB SD card, the 3DS XL gets a 4GB one to store all your Nintendo eShop downloads - but while you get more storage, you won't get a charger unless you're in America. European and Japanese customers will need to buy their chargers and cradles separately, although if you already have a 3DS, DSi or DSi XL you can use their charger(s) with your shiny new 3DS XL.

The move is clearly to cut costs, as Nintendo reckons that the majority of 3DS XL buyers will already own a Nintendo handheld. If Nintendo is wrong about you, don't worry: compatible chargers cost around a fiver from all good outlets, and you can probably get them for even less if you don't mind the odd fire.

The 3DS XL gets some new launch games

The 3DS XL release date is the 28th of July

If you're in Europe, you'll be able to get your hands on a 3DS XL on the 28th of July. US and Japanese customers will have to wait a little bit longer: their launch date is the 19th of August.

The 3DS XL price should be under £200, and might be much, much lower

The UK price of the 3DS XL hasn't been confirmed yet, but the US price has been announced as $199.99. Using our magic calculators, we make that £128 in real money before the inevitable VAT and currency adjustments. According to industry bible MCV, Nintendo's trade price for the 3DS XL is £146 - so with VAT on top that's £167.50 before the retailer's profit, assuming the retailer wants to make a profit: as MCV says, supermarkets "could well be prepared to take a hit on the device to gain key market share and drive store footfall."