Discover how Det. Kenneth Mains solves crimes others had given up on. Unsolved No More: A Cold Case Detective’s Fight For Justice by Kenneth L. Mains

UNSOLVED NO MORE: A Cold Case Detective’s Fight For Justice 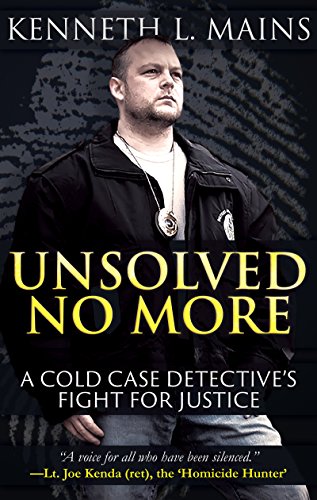 “A voice for all who have been silenced.”– Lt. Joe Kenda (ret), the ‘Homicide Hunter’

As a law enforcement officer for more than fifteen years, Detective Kenneth L. Mains has investigated thousands of crimes, including working undercover with the FBI, solving cold case homicides, investigating the Mafia, and leading one of the greatest cold case organizations ever assembled. This is his story and that of the victims for whom he speaks.

“A tremendous amount of respect for his investigative insights and his integrity.”— Jim Clemente, former FBI profiler and writer for “Criminal Minds.”

UNSOLVED NO MORE will take readers on a journey with a struggling kid who barely graduated high school to a teenager who joined the Marine Corps and finally a man who put himself through college to accomplish his lifelong goal of becoming a police detective. Mains, who is routinely sought out by law enforcement and victims’ families to help solve cold cases, writes about his own investigations to show readers how he goes about solving crimes others had given up on.

“I am determined to be the voice of the lost and the forgotten.”—Kenneth Mains

Discover how Det. Kenneth Mains solves crimes others had given up on.
Unsolved No More: A Cold Case Detective’s Fight For Justice by Kenneth L. Mains