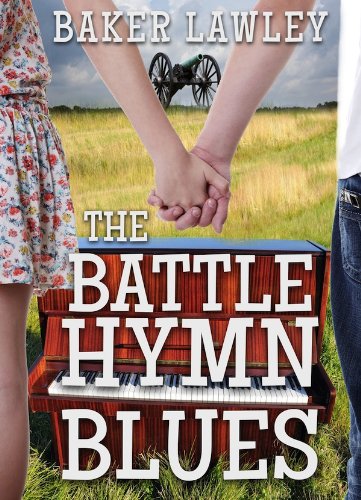 Get THE BATTLE HYMN BLUES for just 99 cents! Save $4.00 off the usual cover price.

Stoney Nix can play anything, from Beethoven to the Blues, on his old rattletrap piano. It’s just a gift, and a good one. Music is his ticket out of Pinewood, Alabama, his ironic, dying hometown, where they reenact the Civil War but cancel marching band because it’s too small.

Then Sadie Green, the hilarious and beautiful new girl (and Stoney’s major crush), convinces him to fight in the fake Civil War battle. What happens there will haunt Stoney forever—and only through voices of the past, struggle, friendship, and his music, will Stoney find himself.

A young adult-paranormal-gothic-comedy-romance, The Battle Hymn Blues is a story filled with ghosts and pranks, music and mystery. It’s a love song to the blues we all share, how the past and the future and happiness have the strangest ways of finding you.

Reviews
“A Southern Gothic gem.”
“I could not put it down!”
“The plot is interesting, the characters are endearing, and the setting and imagery is extraordinary, no matter what the reader’s age or gender. “
“An incredible novel about the power of the human spirit and the power of love.”