The Leaving of Things 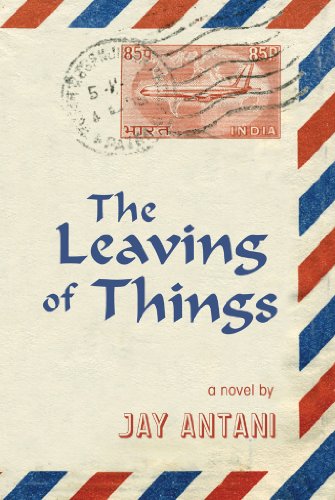 5.0 stars – 28 Reviews
Kindle Price: 99 cents
Text-to-Speech and Lending: Enabled
Don’t have a Kindle? Get yours here.
Here’s the set-up:

Vikram is not your model Indian-American teenager. Growing up in late 1980s Wisconsin, he is rebellious, adrift, and resentful of his Indian roots. But a disastrously drunken weekend becomes a one-way ticket back to the homeland for Vikram after his outraged parents decide to pack up the family and return to India.

So begins a profound journey of culture shock, loneliness, and self-discovery as Vikram–navigating the chaos of daily Indian life and the antiquated social rules of his college–finds the confidence to explore his own creativity, reconnect with his family, and meet unforgettable new friends. Most of all, he discovers that India is his soul … but America is his heart, the land of his destiny, leading to a once-in-a-lifetime test of courage as he sets out to chart a bold new course for his future.

Reviews
(Five star review) “A delightful ride! One of the best novels I have read recently.” – Maria Beltran, Readers’ Favorite Book Reviews and Award Contest
(Five star review) “Consistently mesmerizing! It overflows with a joie de vivre that holds the attention of the reader to the last page. The Leaving of Things is a major success for a debut novel.” – Grady Harp, Amazon Top 50 Reviewer
“India comes alive, even for the uninitiated. The daily life, smells, culture of food, and personal relationships flourish while the reader follows a coming of age story … The richness of this story is in the details of Indian life, the nuances of the culture, the reality of how much easier life is in America. [The Leaving of Things] tells a well-worn story of growing up, rendered beautifully, in a seductive setting.” – Publishers Weekly (review of ABNA Quarterfinal manuscript)