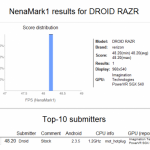 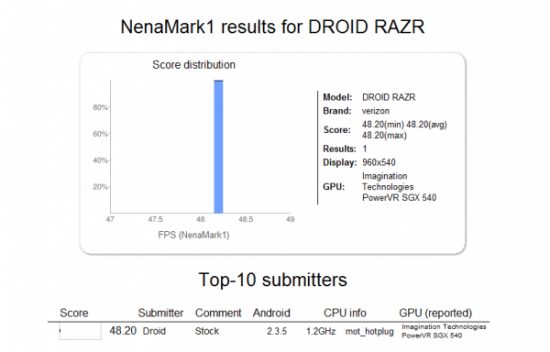 According to a recently posted NeneMark benchmark report, Motorola indeed looks to combine two of its most iconic brands with the introduction of the Droid RAZR. Speculation has tied the Motorola Droid RAZR to the previously rumored Droid HD, though NenaMark’s mention of a 960×540 qHD display casts some doubt on the connection. Then again, the lack of an HD display may account for the phone eschewing the name in favor of the RAZR moniker. Also revealed is a 1.2GHz OMAP 4430 CPU. It is always cautioned not to put too much faith in these online benchmark reports, as their contents are subject to manipulation.

The Droid RAZR should drop in time for the holidays as a member of Verizon’s ever-expaning lineup of Android handsets. With the Droid Bionic out of the way, it is fully expected the RAZR will carry a 4G LTE radio and be ready to run with the best of them.