A budget-oriented Samsung tablet popped up on Geekbench benchmarking tool yesterday, which the company is expected to announce shortly. The Galaxy Tab A carries a model number SM-T387V, which also surfaced in a recent Wi-Fi Alliance listing along with other models, with all of them reportedly supporting LTE capabilities. The model number carrying the letter ‘V’ is said to be a Verizon variant, while other U.S. carriers are also expected to retail the tablet. From the Geekbench listing, the 8-inch Galaxy tablet appears to be an entry-level product considering the included specifications and the points it scored. It is listed with a Qualcomm MSM8937 processor, better known as Snapdragon 430, which is usually found powering smartphones in the budget category.

The quad-core processor is clocked at 1.4GHz and is paired with 2GB of RAM, while the tablet will come running Android 8.1 Oreo out of the box, presumably with Samsung Experience UI on top. This configuration has helped the tablet score 653 points in the single-core test and 1,831 points in the multi-core test, which isn’t anything to boast about. This isn’t a significant hardware upgrade over the last year’s Galaxy Tab A, which came fueled by a slightly lower-end Snapdragon 425 chipset and Android 7.1 Nougat with the RAM capacity staying the same at 2GB. The 2017 model was available as both LTE and Wi-Fi-only models and Samsung may choose to launch the latter variant for its 2018 successor as well, though, no such information has surfaced so far.

In its Wi-Fi certificate, the SM-T387V tablet was detailed to support dual-band Wi-Fi over 2.4GHz and 5GHz frequency bands and had Android 8.1 OS onboard, in line with its listing on Geekbench. The South Korean giant was expected to improve the device internals by providing more RAM and internal storage in the new iteration over the basic configuration provided currently, but the benchmark test states otherwise. Separately, Samsung is also working on a larger Galaxy Tab A variant with a 10.1-inch display, which was cleared by Wi-Fi Alliance and FCC last month. With all the certifications in place, the company may soon make an official announcement to launch the two budget tablets catering to varied consumer needs. 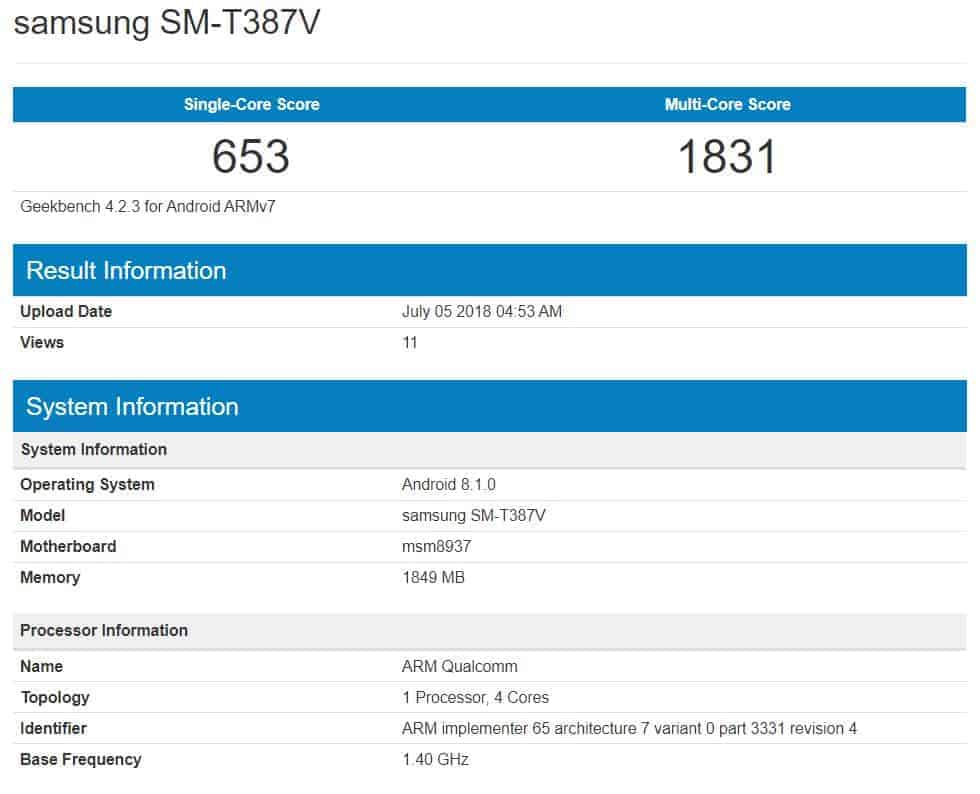