Even for a clairvoyant, the future is never a sure thing.Award-winning author Danica Winters’ Once a Gypsy: The Irish Traveller Series – Book One

Once a Gypsy: The Irish Traveller Series – Book One 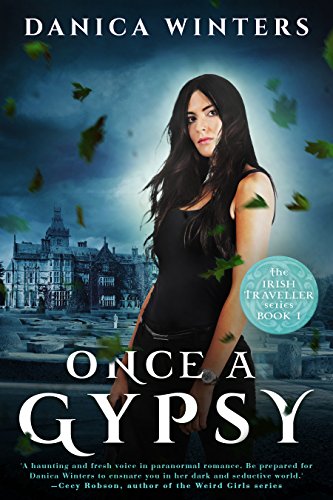 Thrilling and romantic, Once a Gypsy starts a brand new series from award-winning author Danica Winters.

“A haunting and fresh voice in paranormal romance. Be prepared for Danica Winters to ensnare you in her dark and seductive world.”—Cecy Robson, author of the Weird Girls series and 2016 Double-Nominated RITA® Finalist

Even for a clairvoyant, the future is never a sure thing.

Helena has always struggled to fit in with her Irish Traveller family. It’s not just her opposition to getting married or her determination to attend university; Helena also has one talent that sets her apart from the rest of her clan—the gift of the Forshaw, the ability to see the future.

Graham is the groundskeeper at a manor in Adare, Ireland. Though the estate appears idyllic, it holds dark secrets, and despite his own supernatural gifts, Graham can’t solve Adare Manor’s problems by himself. Desperate for help, Graham seeks out a last resort: Helena, whose skills are far greater than even she knows.

When he promises to teach her to control her powers, Helena resists, afraid both of the damage her abilities might do and her increasing attraction to the handsome groundskeeper. Her entire way of life is at risk: Any involvement, especially romantic, with non-Travellers like Graham is forbidden. But Helena’s future is anything but certain, and fate has other plans for her family, her powers, and her relationship with Graham.

The post Even for a clairvoyant, the future is never a sure thing.
Award-winning author Danica Winters’ Once a Gypsy: The Irish Traveller Series – Book One appeared first on Kindle Fire on Kindle Nation Daily.