Consider this a definitive peek at the Google Pixel 3 and 3 XL before they launch, including the first proper look at the new Sand color

The Google Pixel 3 and 3 XL are expected to be announced on October 9 during a dedicated hardware event hosted by Google. Over the past few weeks and months, the two phones have leaked extensively, providing great insight into the design of the two phones as well as their specs. This includes numerous leaked images and supposed hands-on photos and videos. However, here we have extremely clear official renders of the two phones which provide a succinct view of the design of both phones, as well as the different color options. These images were provided to AndroidHeadlines by a reliable source.

The first thing to make clear is there are only two phones. This has been the general consensus up until now although some speculation has hinted at the possibility of a third phone arriving. Even Google itself teased the idea of a third size earlier in the week. However, that is not the case with all the information provided to AndroidHeadlines clearly, and only pointing towards two models – the standard Google Pixel 3 and the Pixel 3 XL. That said, three colors are expected to be announced. The first two are the standard black and white color options that are relatively common to the Google Pixel phone line in general. So there’s nothing particularly new here and versions of the images shown directly below have shown up before via another leak. Although these new renders do at least provide a cleaner look for those that are interested. 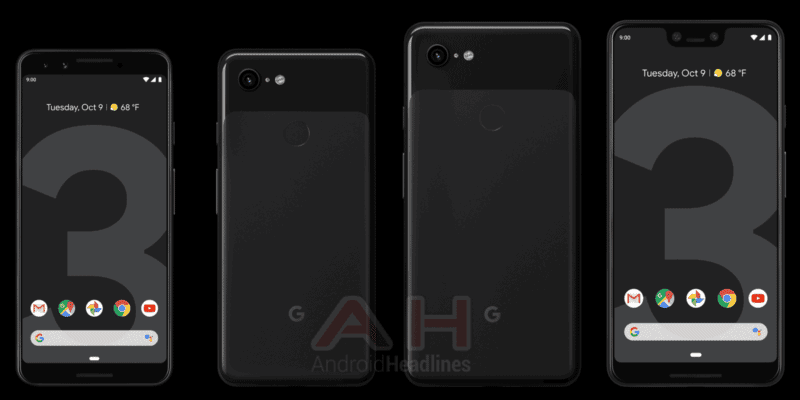 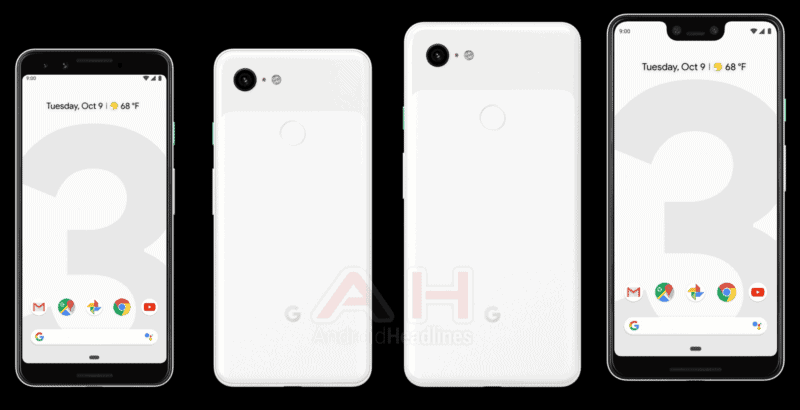 What hasn’t been seen before though is the third color. If you’ve been following the rumors and speculation then it would seem there is the possibility of two different additional colors being announced. One is a possible green/teal (expected to be branded as “mint”) and the other is pink (recently suggested to be arriving branded as “Sand”). While AndroidHeadlines cannot speak of the rumored Mint color, or for that matter confirm whether or not the pink version will be “Sand,” we can provide a closer look at the pink/Sand color with this fresh leak. Here it is.

Before going any further, AndroidHeadlines is of the belief there will not be a Mint color. At least not at launch, as the collection of images shown here are understood to be the colors the Google Pixel 3 and Pixel 3 XL will initially launch in. While there have been references made to “Mint” and “Aqua” recently, we’ve received no indication that color is launching in the near-future. It may still do, but if it does, then it should be expected there will be four colors arriving – which seems out of kilter with Google’s usual plans. Alternatively, the mint color seen in marketing materials might be alluding to the arrival of an additional color at a later date, or may simply be just referring to the colored power button found on the Black model. Speaking of which, the mint-colored power button will only be included with the white version as the new Sand option will come with an even deeper/richer pink colored power button. Regardless of which color a buyer opts for, it does seem as though all three models will adopt the same black bezel frame on the front, with the rear and sides of the phones most representative of each individual color.

Besides the new color and how the three expected colors compare with each other, the images here do not provide any new information but do add further confirmation to many of the design points that have been made before. Such as the size not only being the main difference between the two models, with the XL model also boasting a notch that houses its two front-facing cameras while the standard Google Pixel 3 sees its two front-facing cameras located off to the left-hand side of the phone. Likewise, consistent with previous rumors, and in spite of the front camera duo, the rear of the device will only sport one main camera. The fingerprint sensor and the “G” logo are both expected to remain in relatively the same position they are in on the second-generation Pixel phones.

As for the specs, this has been one of the lesser-covered aspects in recent times, and this is probably a result of the specs not being the main focal point with these phones. In other words, there is nothing too special expected in this department with the specs for both phones (though largely identical between the two) fairly common to most 2018 flagship smartphones. In some cases, trailing the competition. For example, both models are expected to come equipped with a core combination of 4GB RAM (minimum), 64GB storage (minimum) and powered by the Qualcomm Snapdragon 845 SoC. With the spec differences largely coming down to the screen size (rumored to be 6.71-inch vs 5.4-inch), the display resolution (rumored to be 2960 x 1440 vs 2160 x 1080) and the battery capacity (rumored to be 3430 mAh vs 3000 mAh). Both models are also expected to once again feature Active Edge functionality, USB Type-C connectivity, and rely heavily on AI features in general. All of which will be underwritten by Android 9 Pie.