Exercise your gray matter with Brain It On! – Physics Puzzles (app review)

As I previously mentioned in my review of the app Sum, our brains need to periodically be worked out. The Alzheimer’s Association says:

Mental decline as you age appears to be largely due to altered connections among brain cells. But research has found that keeping the brain active seems to increase its vitality and may build its reserves of brain cells and connections. You could even generate new brain cells.

Brain It On! takes a different approach from Sum, which relies primarily on math puzzles, and allows you to draw shapes to solve the various objectives given in each level.

Brain It On! Overview:

At its core Brain It On! is a physics puzzle game. There are 100 levels to solve. They are grouped in pages of 20 and in order to unlock pages 2-5, you’ll have to collect stars by solving puzzles. Each puzzle has the opportunity to earn 3 stars. One star for solving the puzzle, one star for doing it within the number of allotted shapes, and one star for doing it within the time limit. If you don’t have the patience to collect the required stars, then you can purchase individual pages for $0.99 each.

Each level has a specific objective. It’s up to you to think of a way to achieve said objective by drawing shapes on the screen. As you solve the puzzles, they progressively get harder. I’ve found that I only have the patience to solve 2-3 puzzles at a time before I have to turn it off. It can be frustrating if you’re like me and don’t like to move to the next puzzle without getting all 3 stars first. It seems that when I pick it up again, it’s easier to think of a solution, then when I was losing patience with the level. Having said that, this is a casual game at it’s best.

You can also login to Facebook to see leaderboards and compete with your friends.

The game was designed using the Unity game engine, which is why I was surprised at the game’s simple interface. I’m a big fan of Google’s Material Design Language and wish that they would use in the app.

In spite of the lack of Material Design, I still enjoyed the game. 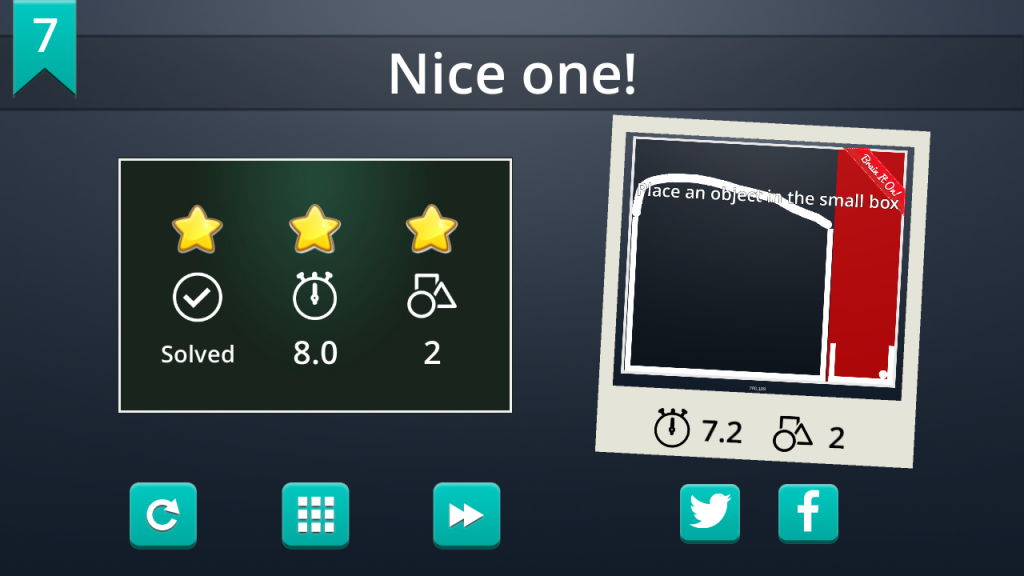 Brain It On! setup:

The game is very to easy to install. Just download it from Google Play and follow the prompts. You can sign in to Facebook as well, but it is not necessary to play the game.

Who will enjoy Brain It On!:

If you enjoy physics puzzle games or any puzzle game in general, then I’m sure that you’ll enjoy this game.

What could be better

Brain It On! summary:

This is a fun physics puzzle game that will help exercise your gray matter. Eventually, you’ll beat all the levels and uninstall the game, but until then, it’s a fun game.

The post Exercise your gray matter with Brain It On! – Physics Puzzles (app review) appeared first on AndroidGuys.