Express Yourself With The Updated Tumblr iOS App 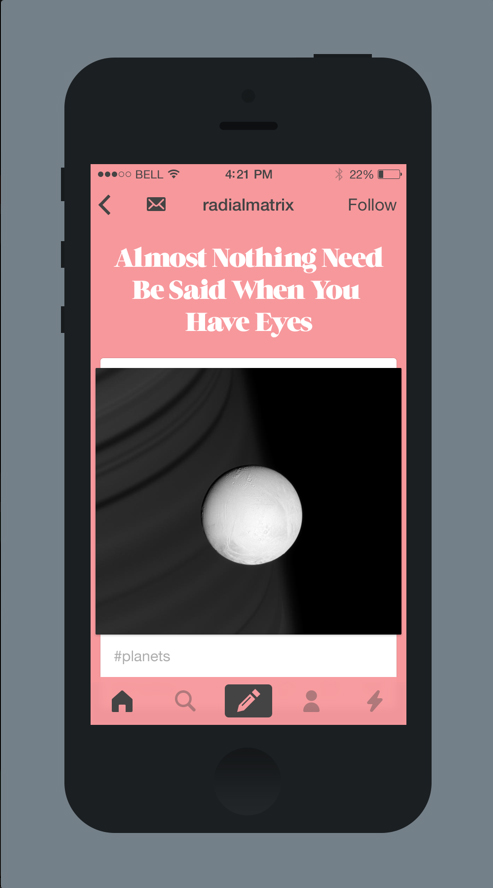 If you ever find yourself browsing the popular blogging platform and social network Tumblr, the customization options seem endless. But that wasn’t the case for the official iOS app for the service, until now.

With an update to version 3.6, users now have complete control over how their blog looks in the app. Some of the features that can be customized include colors, fonts, and pictures.

And now the service will automatically sync changes between the desktop and iOS version of blogs. Speaking to Mashable, the Yahoo-owned property said the update is a substantial one:

“This is our biggest launch in the past five years,” Peter Vidani, creative director at Tumblr, told Mashable. “We’re allowing customization and theming to occur in mobile apps, which is huge, because mobile takes up half of our total traffic and it’s rapidly growing.”

Key components are still built into the dashboard of the apps, but you can hide or show whichever parts of the layout you want. This is particularly important for brands that probably don’t want to use an avatar and prefer a logo instead.

Before todays update, the most recent major version arrived in November. Along with a complete redesign for iOS 7, version 3.5 brought a new post compose screen and post chooser.

A universal app designed for the iPhone/iPod touch and iPad/iPad mini, Tumblr can be downloaded now on the App Store for free.

For other recent app news, see: Latest Google Maps Update For iOS Makes It More Apple Friendly, Soundflake Could Be The Best SoundCloud iPhone Client Out There, and Telltale Games Gives Us A Closer Look At Its Upcoming Tales From The Borderlands.

Express Yourself With The Updated Tumblr iOS App is a story by AppAdvice.com
AppAdvice - iPhone, iPad, iPod, App Reviews + News
Get the latest tips & apps for your Smartphone