Extend your Galaxy S5 battery life with these tips and accessories 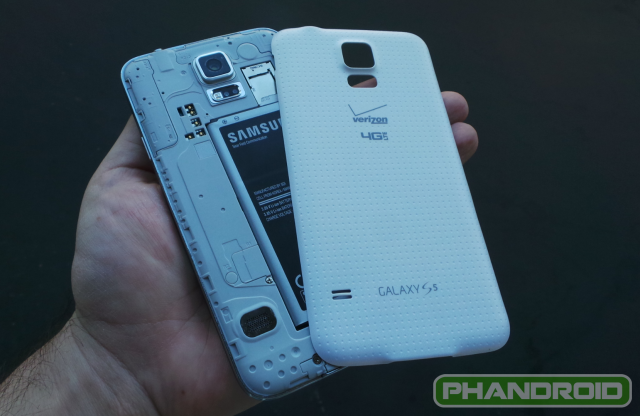 The Samsung Galaxy S5 is a powerful device. It makes sense, then, that it is also a power-hungry device — that 5.1-inch 1080p Super AMOLED display and quad-core processor aren’t going to run themselves, after all. To account for this and then some, Samsung has included a juicy 2800mAh battery in their latest flagship, even going the extra mile and introducing a new Ultra Power Saving mode to provide some extra life when a charging outlet is nowhere to be found.

Even with a fat battery and optimized software, there are still some steps you can take to insure you get the most out of your battery life, from simple tips to accessories like extended batteries. Here’s your guide to keeping your Galaxy S5 running no matter what you throw at it.

Properly condition and care for your battery

Strip away the software, the hardware, the smartphone itself and you are left with a lonesome 2800mAh lithium-ion (Li-ion) battery. It makes sense, then, that extending battery life starts with the simple care and maintenance of the actual component itself. Luckily, we have all the tools we need right out of the box.

There is a popular debate as to whether or not Li-ion batteries need to be “conditioned” or “primed.” The process goes like this:

The idea is that the battery is initially calibrated by allowing it to complete one full power cycle without charging after your smartphone is powered on for the first time. Some even suggest to repeat this cycling process up to three times for a new device. This process is said to reset the battery’s memory.

The process itself is not a myth. It is proven as a recommended way to condition nickel-based batteries. Remember, though, with the Galaxy S5 — or any smartphone — we are dealing with a Li-ion battery. The usefulness of Li-ion battery memory priming is contested, and some even assert that the process can do more harm than good; Li-ion batteries have a shelf life often measured in cycles, so each complete cycle theoretically brings the power cell closer to its end-of-life.

Some scientists and manufacturers, however, do recommend cycling a Li-ion battery up to once a month to calibrate the power cell and help eliminate the buildup of film layers between its anode and cathode. You can see the mixed messages consumers are receiving about the process of conditioning.

Our recommendation: allowing your Galaxy S5’s battery to cycle when new won’t cause any damage to the device — many people let their phone drop to 0 percent without even trying — and repeating the process a few times a year won’t greatly reduce the life of your battery any more than normal use. While its positive benefits are debated, it’s a simple step you can take to potentially improve the performance of your battery.

A better way — the “top off” method 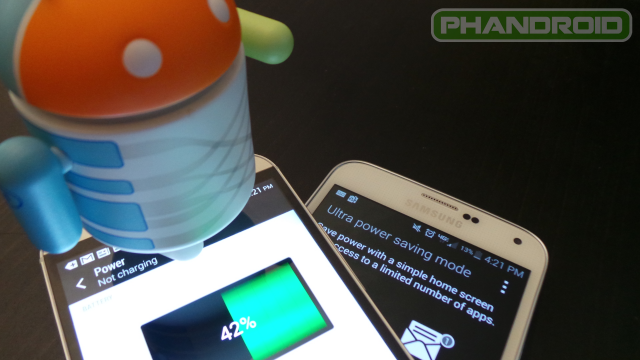 While you may or may not choose to complete a full power cycle to prime your battery when new (or if capacity begins to fade), a much better method of care is the “top off” approach. No, this has nothing to do with taking your shirt off, rather it refers to keeping your battery north of 50 percent as much as possible.

As we touched on in the debate over battery calibration, a Li-ion battery’s life is measured in cycles. Each complete charging cycle wears on the battery and brings it closer to total death. Keeping your Galaxy S5 between 50 and 100 percent helps to reduce this cycling strain.

Of course, there is always a caveat. Another popular debate on battery care centers on whether or not leaving a device plugged into its charger after reaching 100 percent will damage the battery. One side points to the fact that most modern devices are smart enough to disengage charging when 100 percent capacity is reached, only reengaging when stored power again drops below maximum. The other side sees even this process as potentially harmful to the longevity of a battery.

In reality, occasionally leaving your phone on the charger for extended periods of time is unlikely to cause any serious damage, but we recommend avoiding this when possible. It shouldn’t be surprising that beyond this there is a school of thought that, like allowing the charge to drop below 50 percent, believes that frequently reaching 100 percent capacity can also have potentially adverse effects on battery life.

Remember when we were talking about leaving your Galaxy S5 on the charger? Here is one compelling reason not to. Ever notice how your device feels a bit warmer after a robust charging session? We want to avoid this. Li-ion batteries do not enjoy getting overly hot.

Cooler is always better, as excessive heat will cause battery longevity to decrease over time. The hotter the battery, the faster this capacity decreases. Avoid leaving your phone out sitting in the sun, don’t keep it baking in the car or on the beach, and keep it stored somewhere else if you are a glassblower or firefighter or anyone else whose occupations take place in overly hot environments.

Also be weary of wireless charging. While it is a great convenience and pretty awesome use of technology, as it stands, some wireless chargers can get even hotter than simply leaving your phone plugged into a wall outlet.

In a pinch, use the Galaxy S5’s power saving modes 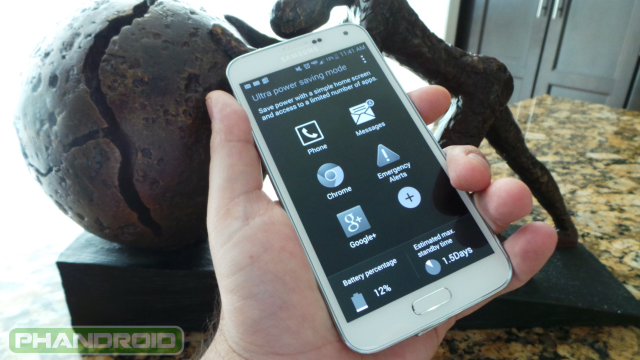 You’ve primed your battery, kept it topped off, and have otherwise treated it with kid gloves. That doesn’t mean you can avoid that inevitable situation when battery life drops into the red with no available charging outlet in sight. Here is where the Samsung Galaxy S5’s software optimizations come into play.

The Galaxy S5 offers two special modes to help get the most out of your battery: Power Saving Mode and the new Ultra Power Saving Mode. Both are designed to cut back on services that cause excessive battery drain, one more extreme than the other.

Power Saving Mode will turn off unnecessary connections that tend to drain battery life like WiFi, Bluetooth, and GPS; halt wireless syncing activities; and dim your Galaxy S5’s display. You lose some functionality but the result is a battery that lasts longer, giving you more time to find a place to charge without missing any important calls or texts. Enable Power Saving Mode by:

You will be presented with several options to choose what features Power Saving Mode disables, including the option to restrict background data, restrict device performance, and switch the display from color to grayscale.

If battery life is dwindling close to zero, a more extreme form of power conservation is available. Samsung’s claim is a device with only 10 percent battery can last an additional 24 hours in standby when operated under Ultra Power Saving Mode. It is enabled in a similar manner to Power Saving Mode by:

Ultra Power Saving Mode presents the user with a dramatically simplified interface with minimal access to apps and services. It shuts down unnecessary wireless connections in the same manner as Power Saving Mode and switches the display mode to black and white. 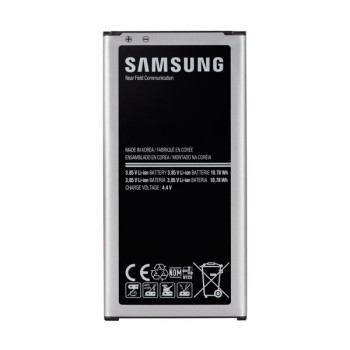 Removable batteries have been slowly going the way of the dinosaur, but Samsung remains one of the few manufacturers that continues to see the feature as a must-have. While the argument can be made that non-removable batteries allow for slightly higher capacities crammed into smaller spaces, it hardly trumps the advantage of being able to swap out a dead battery for a freshly charged one or even replace the battery altogether with an extended version packing more milliamp hours.

If you simply are looking for an extra battery to pack along in case of an emergency, Samsung currently offers the Galaxy S5 Standard Battery for $29.99. For the price, you more or less double the uptime of your GS5 with a second battery rated at 2800mAh. Samsung also offers the Galaxy S5 Spare Battery Charging System, which includes the 2800mAh standard battery as well as a charging dock to keep it fully juiced up for $49.99.

Several third party vendors also currently offer or have announced extended batteries for the Galaxy S5. Mugen offers a 2950mAh Slim Extended Battery that won’t add to the thickness of the Galaxy S5 while providing 5 percent longer battery life. At about $45, you will have to be the judge as to whether the extra time is worth a little extra cash out of the pocket. 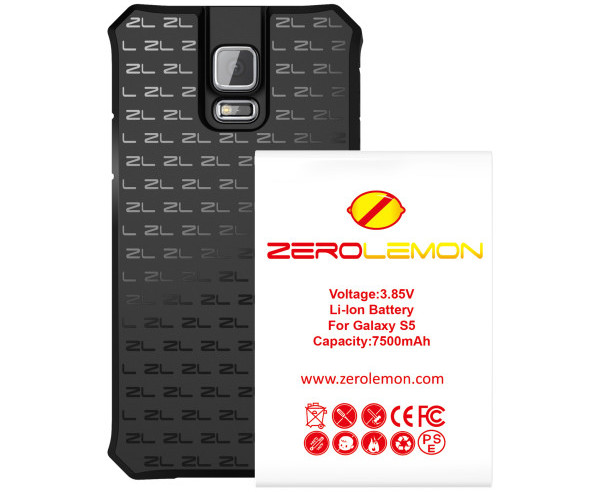 If you are looking for a Galaxy S5 battery on steroids, consider ZeroLemon’s TriCell Armor 7500mAh Extended Battery. The power cell is much larger than the standard GS5 battery, and therefore requires you to swap out the standard back plate for an included replacement case. The battery and case make the phone thicker and heavier, but offer over twice the power capacity and a little added protection to boot.

If multiple batteries do not cut it or if you prefer to keep the stock look of your Galaxy S5 by not cramming in a larger battery and swapping the phone’s back plate, you might consider a portable charging accessory instead. These include external power packs that can charge your phone’s battery or any number of cases that include a built-in battery pack to provide backup power. 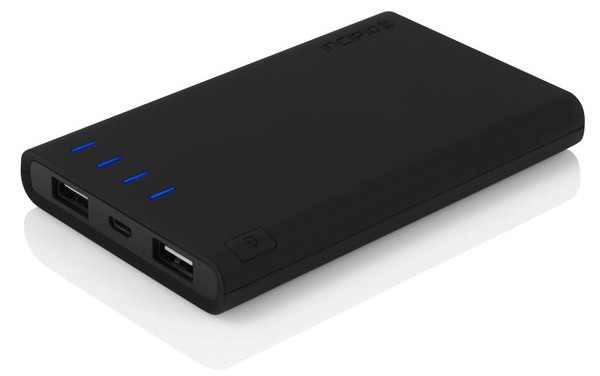 For the price, you can’t go wrong with Incipio’s 6000mAh offGRID battery pack. For $69.99 you get the ability to charge two devices at once with a total of 3.1 amps. We used the offGRID battery pack during an extensive four days of off-the-grid cycle touring to great success. Incipio offers several other options, but you might consider similar offerings from other manufacturers such as Mophie. Samsung also offers their own portable batteries at ratings of 3100mAh for $59.99 and 9000mAh for $99.99.

Companies like UNU currently offer Galaxy S5 cases with built-in extended batteries, and more are likely to surface on the market over the next few months. These cases connect directly to your GS5’s charging port and provide a steady stream of extra charging power to keep your battery going as long as possible.

Get more out of your Galaxy S5

These tips, tricks, and accessories will help you get the most out of your Galaxy S5’s battery life. That extra battery life will give you ample time to get the most out of the many features offered by Samsung’s latest Android phone. Consider checking out our list of 50+ Galaxy S5 tips and tricks for even more ways to take your new smartphone to the next level.