The extraordinary story of a woman and her family’s harrowing experiences in the years before and during World War II.One More Moon: Goodbye Mussolini! One Woman’s Story of Fate and Survival by Ralph Webster

One More Moon: Goodbye Mussolini! One Woman’s Story of Fate and Survival 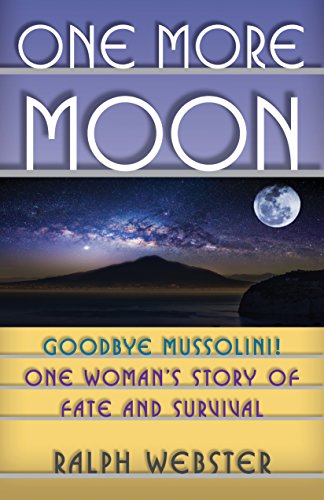 – Learn More
Text-to-Speech and Lending: Enabled
Enjoy Ralph Webster’s Books? Tell us Why and Win a Free Book!
Don’t have a Kindle? Get yours here.
Here’s the set-up:

Goodreads Choice Nominee Ralph Webster tells the true story of his grandmother’s desperate journey from her life at the Pensione Alexandra in Naples to America – after Mussolini and the Fascists join with Hitler – and as countries across the world close their doors to Jewish refugees fleeing the spread of Nazi evil.

In 1934, at age fifty-one, Elsa’s comfortable life in Mussolini’s Fascist Italy changes remarkably when she and her husband, Paul, purchase the Pensione Alexandria overlooking the Mediterranean in Naples. Though German Jews, they are embraced by their Italian neighbors, and for the next several years, the pensione flourishes and becomes their perch to observe the world’s events. Travelers from across Europe and America come to the door, each with their own story, mystery, or surprise. Nearly all have been touched in some way by the ominous changes occurring to the north, in Nazi-controlled Germany.

When war breaks out in Europe and Italy sides with Germany, Elsa and her family’s fears are quickly realized. The growing sense that the atrocities in German-occupied lands will soon occur in Italy forces them to give up their pensione and attempt a desperate journey to safety in America. The way seems impossible. Day by day, war makes travel increasingly difficult as countries begin closing their doors to refugees.

Told in Elsa’s words and written by her grandson, One More Moon is the extraordinary story of a woman and her family’s often harrowing experiences in the years before and during World War II.

“Webster creatively mixes historical storytelling with a personal story… the first-person narration is original and compelling.” The BookLife Prize, June 2018

The post <p style="text-align:center;font-weight:bold;">The extraordinary story of a woman and her family’s harrowing experiences in the years before and during World War II.<br /><em>One More Moon: Goodbye Mussolini! One Woman’s Story of Fate and Survival</em> by Ralph Webster</p> appeared first on Kindle Fire on Kindle Nation Daily.