Facebook Introduces A New ‘Nearby Friends’ Feature For The iPhone 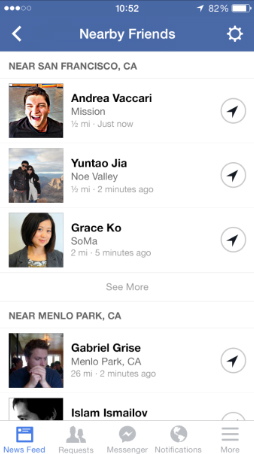 Social networking giant Facebook has just announced a new optional feature for iPhone app users. As the name suggests, Nearby Friends will notify you when Facebook friends are near your location.

Because of obvious privacy concerns, the feature is completely optional and can be turned on and off at anytime. Users can also select who can see their location like your friends, close friends, or a specific list of users.

Users and their friends must both have the feature turned on to see each others locations. And according to Facebook, users can also share their location for just a specific amount of time, like an hour. It can even be used to see when friends are travelling:

When Nearby Friends is on, you can see when your friends are traveling if theyre also using this feature and sharing with you. Youll be able to see the city or neighborhood they are in, including on their profile. When you see a friend visiting a place youve been, its the perfect opportunity to send a recommendation for a great restaurant. You can also make last-minute plans to meet up with a friend who happens to be in the same place youre headed to.

Facebook said the feature will be rolled out to users in the United States over the coming weeks. It will not require an app update.

Facebook Introduces A New ‘Nearby Friends’ Feature For The iPhone is a story by AppAdvice.com
AppAdvice - iPhone, iPad, iPod, App Reviews + News
Get the latest tips & apps for your Smartphone