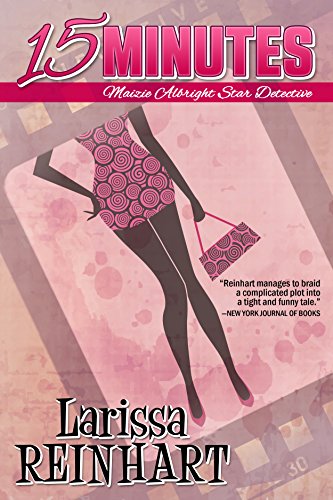 – Learn More
Text-to-Speech and Lending: Enabled
Follow author Larissa Reinhart on BookGorilla
Don’t have a Kindle? Get yours here.
Here’s the set-up:

Three Teen Choice Awards, One Emmy Nomination, and several Maxim covers later, Maizie Albright was an ex-teen star, stuck in reality show hell, and standing before a California judge.
She has one chance for a new life: return home to Black Pine, Georgia, and get a job that has nothing to do with show business.
So why not become the person she played during the happiest days of her life? A private detective.
First problem: She’s got to do it in 10 days.
Second problem: She’s got to convince the only PI in town to hire her.
Third problem: She lost the client’s wife on the first day.
Fourth problem: She may be falling in love with her boss. And she might have just lost him his business.

“Maizie Albright is the kind of fresh, fun, and feisty star detective’ I love spending time with, a kind of Nancy Drew meets Lucy Ricardo. Move over, Janet Evanovich. Reinhart is my new ‘star mystery writer!’” — Penny Warner, Author of Death of a Chocolate Cheater and The Code Busters Club

“Sassy, sexy, and fun, 15 Minutes is hours of enjoyment—and a wonderful start to a fun new series from the charmingly Southern-fried Reinhart.”— Phoebe Fox, author of The Breakup Doctor series

“Armed with humor, charm, and stubborn determination, Maizie is a breath of fresh air. I adored every second of 15 Minutes.”— Terri L. Austin, bestselling author of the Rose Strickland Mysteries and the Null for Hire series.

“I love Larissa Reinhart’s books because they are funny but they also show the big heart of the protagonist. I strongly recommend this book and look forward to the next in this series. Five stars out of five.” —Lynn Farris, Hot Mystery Review

“This new series is a great mix of Hollywood with Southern charm. This story is totally unpredictable with lots of twists and turns. Can’t wait to see what the future holds for Maizie!” — Book Babble

“Celebrity gossip fans, reality TV fans, and of course mystery fans are going to love Maizie Albright. Full of humor and romance, this is a great start to a new series.” —The Book’s The Thing

“I would recommend this book if you’re a fan of the chic lit genre. There is a mystery and plenty of suspects/characters to keep you guessing and entertained.” —More Than A Review (PG-13 rating)