Fans of James Patterson, Dean Koontz, and John Grisham are in for a treat!The Advocate: A Women of Redemption Suspense Thriller by Lori Lacefield

The Advocate: A Women of Redemption Suspense Thriller 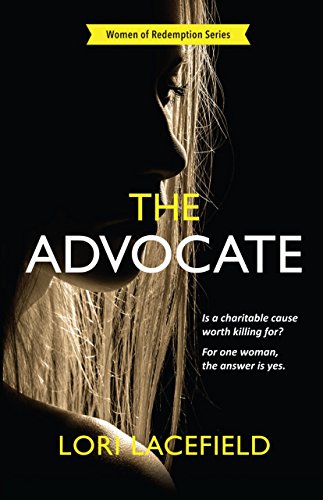 – Learn More
Text-to-Speech and Lending: Enabled
Follow author Lori Lacefield on BookGorilla
Don’t have a Kindle? Get yours here.
Here’s the set-up:

Fans of James Patterson, Dean Koontz, and John Grisham will love this new series!.
“A fast-paced page turner, well written with lots of twists and turns…” — Bonnie L
“An edge-of-your-seat type read!” —T
“The twists and turns from beginning to end makes the book difficult to put down…” —A Lawrence

Former victim Palmer Reed is facing the anniversary of her kidnapping and the unsolved death of two men when she receives an invitation to join the board of Tennessee’s prestigious Diamond Foundation, an organization dedicated to helping the victims of crime. Run by Marjoram Swall, a woman known as The Vindicator, who helped rescue Palmer twenty years ago from the hands of their mutual enemy, the foundation casts Palmer into its society of country clubs, elite galas, and fundraisers. Palmer feels like she has finally found her calling, believing that helping other victims will help resolve her own painful past.

But something dark lies beneath the Foundation’s surface, and when Palmer uses the organization’s sinister method of extortion to fund its cause to instead enact vengeance upon those who hurt her and destroyed her father so many years ago, she finds herself the target of an assassin, her father’s enemies, and even Marjoram herself. For Palmer has discovered what the other directors of the Foundation don’t know— Marjoram’s plot to take justice to the ultimate level—murder.

A page-turning psychological suspense thriller that is part of the Women of Redemption Series, books that feature women who may not be perfect, but perfectly kick-ass when given a second chance. Be one of the first to discover this new series that has readers raving!

The post <p style="text-align:center;font-weight:bold;">Fans of James Patterson, Dean Koontz, and John Grisham are in for a treat!<br /><em>The Advocate: A Women of Redemption Suspense Thriller</em> by Lori Lacefield</p> appeared first on Kindle Fire on Kindle Nation Daily.