For fans of The Walking Dead and Dawn of the Dead, a special limited-time box set of all four Necrose Series books in one volume! Necrose Apocalypse: The Complete Collection by Tim Moon 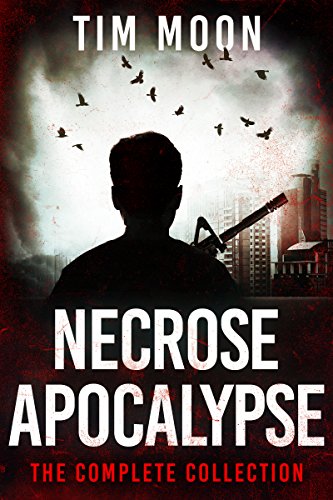 – Learn More
Text-to-Speech: Enabled
Enjoy Tim Moon’s Books? Tell us Why and Win a Free Book!
Don’t have a Kindle? Get yours here.
Here’s the set-up:

A special limited-time box set of all four Necrose Series books in one volume! Book Three in the series is coming soon. Catch up today with the complete collection!

First they rise. Then they spread. Soon…they’ll evolve.

You don’t expect the zombie apocalypse when you’re on vacation.

The Necrose-7A virus is spreading. It catches up to Ben Chase on his way to Kona, Hawaii for an adventurous trip with his friend Ty. Unwilling to acknowledge the reality of the horrors they witness, they nevertheless find themselves surrounded by flesh-eating monsters – zombies.

The infection spreads virtually unchecked, forcing them into a daring fight for survival. When Ben is faced with a critical decision that places the fate of his friends in his hands, what he must do to save them is unthinkable.

Dead Apocalypse will leave your skin crawling as you follow Ben’s desperate attempt to survive the doomed island paradise.

Ben Chase and his friends are taking refuge in a government run Quarantine Center. His heart calls him home to save his mom, but the military is planning to evacuate them further away on the uninfected island of Molokai. Flights from Hawaii to the mainland are grounded. It’s an impossible task.

Just as the infected are sweeping across the Big Island of Hawaii, and all seems lost, a glimmer of hope catches Ben’s eye. But will it be worth the cost?

The zombie apocalypse has struck Alaska!

Working security at the airport is often interesting but rarely dangerous. Yet Gavin McKnight finds himself up against a tough choice: follow the rules or defend his coworker.

When things spiral out of control, Gavin rallies survivors in a heart-thumping battle that will forever change his life.

Would you face your worst fear to survive?

I never thought I’d have to answer this question. We never really know what we’ll do until the stuff hits the fan. Split-second decisions can alter our lives forever.

When some idiot burned down my high-rise apartment building, and my friends and I were forced to hit the streets of Miami, I found out exactly what I was capable of.

Because reality is harsh when the streets are filled with zombies and the world doesn’t give a damn how you feel about it.

Not everyone is up to the challenge.

From Anchorage, Alaska to Miami, Florida, NECROSE APOCALYPSE will take you on a thrill ride through the zombie apocalypse. For fans of The Walking Dead, Dawn of the Dead, and authors like Peter Meredith, T.W. Piperbrook, and Ryan Casey.

The post <p style="text-align:center;font-weight:bold;">For fans of The Walking Dead and Dawn of the Dead, a special limited-time box set of all four Necrose Series books in one volume! <em>Necrose Apocalypse: The Complete Collection</em> by Tim Moon</p> appeared first on Kindle Fire on Kindle Nation Daily.