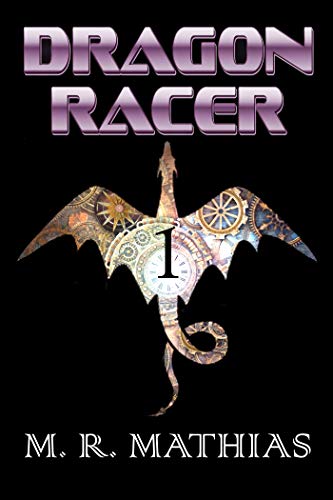 Hovering in the Otherworld above a dystopian land called the Dregs is a place where humans, dwarves, and all the creatures of fae gather once a year to wager fortunes and celebrate the spirit of competition. The place is called Sky Island, for the dragons race around it. Those who risk life, limb, and wing to compete before the gods are granted a kingdom of their own if they win. It is no small thing.

But to race at Sky Island is by invitation only. A dragon racer must first win a Chalice in the realm of men before the gods will even take notice.

After losing her mother, Sharrah Che has moved in with her widowed Aunt. She and Aunt Sadie work at Guotin’s bakery across the lane and enjoy a decent life living under the king’s protection just off of prosperous Gaslamp Avenue. Not all single women are as lucky in this steam and spring powered kingdom full of poor, prosperous, and sometimes unsavory men. Just when Sharrah is starting to feel normal again, and because she is now of an appropriate age, her aunt decides to take her to the dragon races. From there Sharrah’s life is twisted into chaos after she is turned into little more than a prize for Luumin, a terrifying wizard with eyes the color of fall leaves.

At Dragon’s Keep, while punishing Luumin, angry King Travvingto mistakes Sharrah for a racer in training and orders her to ride the dragon named Azure in an upcoming race. All she has to do is hold on and let dark Anshi win.

But things are never so simple.

Don’t miss this amazing new manchu longwei (pure dragon greatness) series from the multiple award winning author who has sold more than a million eBooks and given away over two million more.

Also by M. R. Mathias: The Wardstone Trilogy, The Dragoneer Saga, The Legend of Vanx Malic, The Crimzon and Clover Short Stories, and Fantastica.

Dragon Racer, book two is scheduled to release before Christmas 2018, and book three in late Spring of 2019.