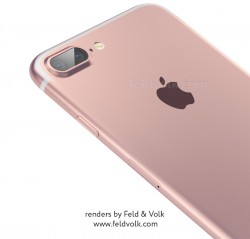 Recruitment at two of Apple's supplier factories has kicked off earlier than expected this year, with a report from Economic Daily News stating that both suppliers are getting a head start on the iPhone 7's assembly.

The new smartphone is referred to as "more complex than previous models," leading to Foxconn and Pegatron's preemptive hiring and manufacturing schedule this year (via CNBC).

Specifically, on Foxconn's website a hiring page reads, "Foxconn Zhengzhou is hiring a large number of ordinary workers. Welcome to join Foxconn: Age between 18-40. Overall monthly salary: 3,800 renminbi. Start working immediately." Applicants are encouraged to apply promptly for the positions, with language suggesting that they might have trouble connecting with Foxconn's job hotline because of the massive amount of people applying.

Due to the posting's suggestion that the iPhone 7's design is more complex than previous generations, Apple's suppliers began the hiring process about a month earlier than they have in previous years. The early start is said to buy the two companies extra time to train the new assembling staff on the intensive build of the iPhone 7. It was the first time in two years that Foxconn began recruitment processes for the assembly of a new iPhone as early as May.

Of course, no specifics were given to explain what exactly is "more complex" about the iPhone 7 this year. Recent rumors point to 2016's iPhone 7 as having a design largely similar to the iPhone 6s and iPhone 6s Plus, with the probable removal of the 3.5mm headphone jack and potential introduction of a Smart Connector, although a recent rumor from Japanese site Mac Otakara contradicted reports on the latter.

Such an upgrade to this year's iPhone would set Apple up for a 2017 mega-cycle iteration on the "iPhone 8" with a new form factor potentially encompassing an edge-to-edge display and integrated Touch ID sans Home Button. But that still leaves confusion over the complexity of this year's model, although it might lie in the introduction of a dual-lens camera system, reportedly exclusive to the 5.5-inch iPhone 7 Plus that will pack 3GB of RAM to help run the image processing of the new camera.

Related Roundup: iPhone 7
Discuss this article in our forums