The game uses an in-app purchase free-to-play mechanism across 100 new levels, a new challenge mode, and more. The original game was very positively reviewed when it was first released and all three editions have been incredibly popular. 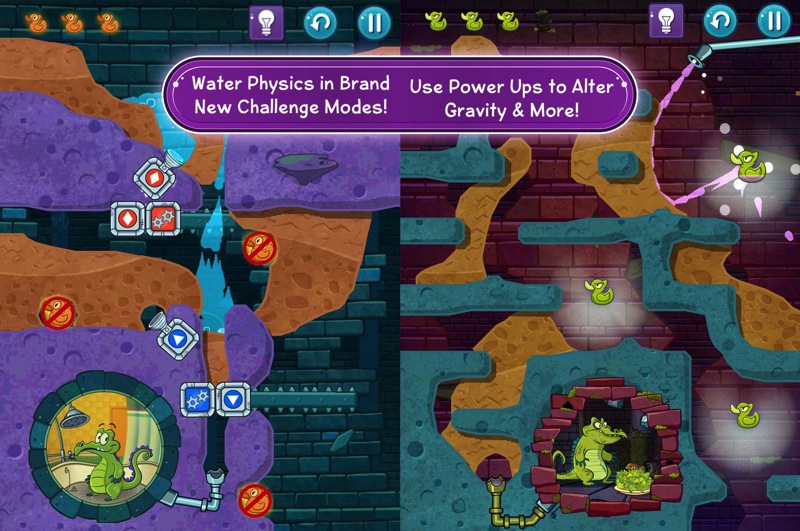 Get ready to join Swampy, Allie, and Cranky on their NEXT exciting adventure!

The sequel to the most addicting physics-based puzzler from Disney has finally arrived. Where’s My Water? 2 launches with three brand new locations including the Sewer, the Soap Factory, the Beach. Best of all, the puzzles are all free! Cut through dirt, and guide fresh water, purple water, and steam to help Swampy and his friends!

- Play 100+ levels and challenges with a brand new look in the Gator universe featuring Swampy, Allie, Cranky, and Mystery Duck!
- Introducing ‘Challenge Modes’ to replay the levels in explosive new ways!
- Dig as fast as you can and get as many duckies as possible in ‘Duck Rush’ levels!
- ‘Tri-ducking’ is now faster, better and more fun with boosts, such as Vacuum, Dropper, and Absorber! Small fees may be required for these additional boosts.
- Connect through Facebook and see if you can beat your pals on the adventure!
- Experience fun mechanics that are uniquely designed for each character!
- Complete achievements and earn special themed duckies such as gladiator-duckie, astronaut-duckie, hula-duckie, and many more!
- Stuck on a level? Use hints to help you solve the puzzles!

The in-app purchases allow users to buy 'energy' which slowly drains during play, hints on how to complete levels, and various power-ups.

Where's My Water 2 is a free download for the iPhone and iPad. [Direct Link]