The galaxy is on the brink of war and only four dysfunctional, hormone-driven teenagers from Earth stand in its way. God help us all. Kings Of The World by Matt Pike 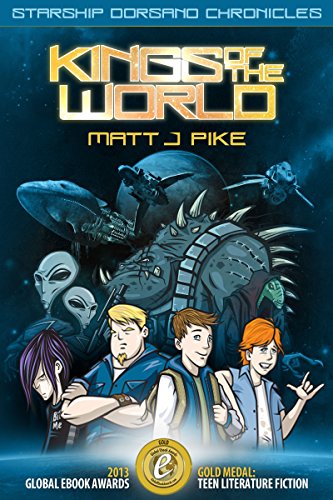 – Learn More
Text-to-Speech and Lending: Enabled
Don’t have a Kindle? Get yours here.
Or check out the Audible.com version of Kings of the World (Starship Dorsano Chronicles Book 1)
in its Audible Audio Edition, Unabridged!
Here’s the set-up:
Gold Medal for Teen Literature Fiction at the 2013 Global Ebook Awards

It didn’t take Cooper long to come to the conclusion that space sucks. It seems everyone there despises humans, everything’s too far away and the travel makes you heave. Worse still, Cooper’s stuck there with his best mate, The Ginge – who can’t tell where games end and reality begins – and two other former classmates who want to beat the crap out of him.

Oh yeah, and people, well… alien people are trying to kill them.

Space does have some good points. The boys can have anything they wish for, all they have to do is ask it … or think it. Plus they are now, somehow, Earth’s leaders – as in, more important than the President of the USA.

If Cooper can only stop the other boys from gorging on their every desire, chasing the most human looking alien women and fighting each other, he might convince everyone that humans aren’t the galactic equivalent of white trash.

But things are about to get a whole lot worse. War looms and Cooper and his inept sidekicks are caught in the middle. They, the Earth and the Galaxy will never be the same again.

“It is quirky, off the wall and deliciously zany.” Robert Davidson – Author of The Tuzla Run

“This modern day coming of age story is very well crafted, so real, and so funny. Hilarious!” Steve Ward – Author of The Test Pilot’s Daughter series

The galaxy is on the brink of war and only four dysfunctional, hormone-driven teenagers from Earth stand in its way. God help us all.
Kings Of The World by Matt Pike