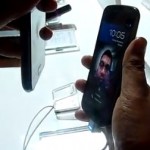 One of the cool new features of Android 4.0 demonstrated at the Galaxy Nexus launch event in Hong Kong was something called Face Unlock. Set your phone to “recognize your face” and afterwards you can use the front-facing camera as a method of unlocking your phone, so long as it correctly matches you to the initial picture with which you set up the service.

But what if someone took a picture of you, put it in front of your phone, and was able to sneak into your phone unauthorized? I discussed this the day of the Galaxy Nexus launch, and as someone on Youtube illustrates it’s completely positive, but it shouldn’t be a cause for concern:

In my opinion, no fool would think Face Unlock is about security. We haven’t reached the “Minority Report” level Iris Scanners perfectly identifying individual. Everyone knows Face Unlock on the Galaxy Nexus isn’t the mind blowing feature that financial institutions will immediately start adopting. It’s about quick and easy unlocking. That’s it.

Forget the slide to unlock feature. No, really… forget it. Forget the 9 dot grid pattern unlock. When lighting is good, just pull out your phone, look at it, and you’re in. It’s about elegant simplicity.

I’ll be the first to admit that Face Unlock doesn’t work perfectly yet. I had a bunch of trouble testing it on Galaxy Nexus launch day. But it will get there and Android will be better for it. And note… I said “better” and not “more secure”.