Galaxy S9 Plus With Android 9 Pie Appears On GFXBench

The Samsung Galaxy S9 Plus running Android 9 Pie seems to be in testing, at least according to a new GFXBench listing. The Galaxy S9 Plus appeared on GFXBench, and it’s clearly running Android 9 Pie, which suggests that Samsung is working on the update as we speak. The listing says that the phone is running “Invalid Android Samsung ss Edition”, which is how test variants of Samsung’s custom UI are labeled in benchmarks, so that is not surprising at all, but the benchmark does also say ‘Android 9’ is in the mix.

Samsung still did not share more info regarding the Android 9 Pie update for its smartphones, so we do not really know when to expect this update to arrive to the Galaxy S9 Plus, or any other Samsung-branded device, for that matter. The Galaxy S9, S9 Plus, Note 9 and Note 8 will, presumably, be amongst the first phones to get this update once it’s ready, and that will probably happen either at the end of this year, or in early 2019, though we’re only guessing, based on Samsung’s Android 8.0 Oreo roadmap. It is still unknown how will Android 9 Pie affect Samsung’s skin, in other words, how much of its skin is Samsung planning to change, as Android 9 Pie does bring quite a few changes compared to Android Oreo, both in terms of the design, and functionality.

It remains to be seen if Samsung will adopt Android 9 Pie’s semi-gesture navigation system, and its overview screen, along with horizontal multitasking cards, or will the company stick to its current setup. You can expect Android 9 Pie features to make their way to Samsung’s devices, though, features like ‘Adaptive Battery’ and ‘Adaptive Brightness’. All in all, more info will probably surface in the coming weeks, for both the Galaxy S9 and S9 Plus, so stay tuned for that. 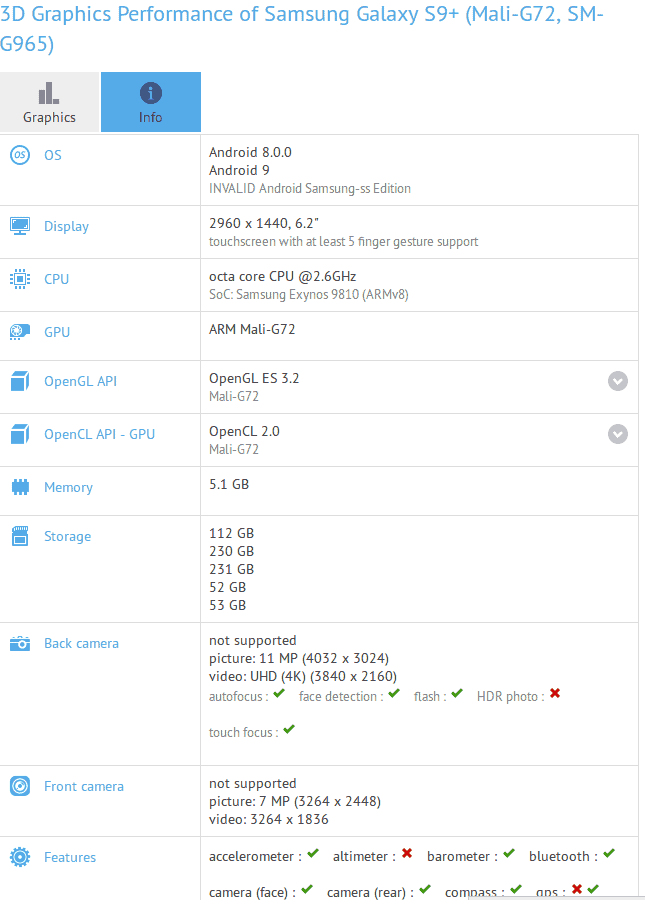 The post Galaxy S9 Plus With Android 9 Pie Appears On GFXBench appeared first on AndroidHeadlines.com |.