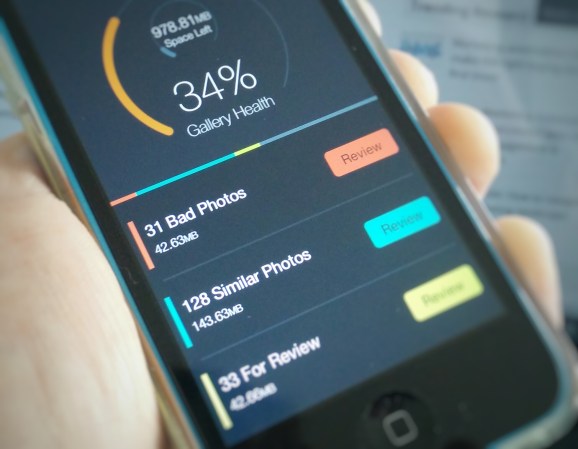 Smartphones may have helped unleash the amateur creative in everyone, but there’s little question it has opened a Pandora’s box of bad photos. And this is where Gallery Doctor wants to help. 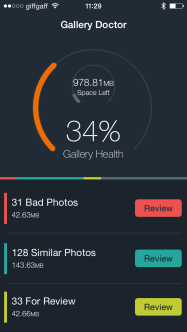 The handiwork of Israeli startup MyRoll, Gallery Doctor first launched on Android back in February. In a nutshell, the app scans your camera roll and iCloud and pulls out the ones that are blurry, duplicates, have bad lighting, or are just plain-old boring.

The problem it’s looking to solve — thousands of photos clogging up camera rolls and cloud-storage services — is universal. And that’s why it’s now available to iPhone users, too.

Sponsored by VB
Mobile engagement is the new customer engagement. Period. You’re already behind. Catch up with our free upcoming expert roundtable.

Once the app has scanned your device, you can hit “Review” for each option (“Bad Photos,” “Similar Photos,” “For Review”) and in one fell swoop delete all the images identified by Gallery Doctor’s algorithms as “awry” — or you can manually peruse them one-by-one and assess them individually.

This is perhaps where Gallery Doctor differs from other similar apps like Cleen or Flic, insofar as Gallery Doctor can remove the manual labor by letting you delete all your “bad” photos with a single tap.

There’s no denying that Gallery Doctor has taken some cues from the aforementioned alternatives. Indeed, Cleen and Flic tap Tinder’s usability book by letting you swipe left or right to indicate whether you wish to keep a photo — it’s basically an easy way of cleaning up your camera roll. 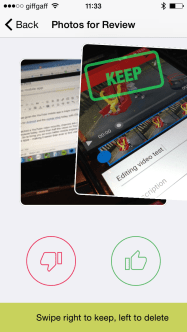 With Gallery Doctor, there is a similar feature in its “For Review” section, which is where it highlights questionable photos–when it’s not certain whether they’re good, bad, boring, or what. Here, you can manually swipe to tell it what’s what.

Based on our tests, its algorithms are fairly accurate, though in the early stages you probably shouldn’t rely entirely on Gallery Doctor’s curation — there are definitely some that it deems “bad” that aren’t really “bad” (in this writer’s humble opinion, at least).

Using machine learning, however, Gallery Doctor should improve over time as it learns which kind of photos you like and don’t like.

Show me the money

Though the Gallery Doctor app for Android is free to download, with no ads or subscriptions in place either, MyRoll has opted to charge $3 to download the iPhone incarnation. We asked MyRoll founder Ron Levy about this disparity.

“We launched Gallery Doctor as a completely new product and we wanted to see how users react,” he says. “The reaction is fantastic with over 75 percent  of users actually accepting our recommendations to delete photos. Since one of the ways we’re looking to monetize Gallery Doctor is through a paid app, we decided to check that first on iOS, given that the Android app is already free.”

In other words, MyRoll is exploring monetization options, and it hasn’t decided how to do so yet.

It’s worth noting that the main MyRoll app on Android (the iOS version was pulled a while back) charges to remove ads, and an additional Premium option is available with add-on services such as cloud storage. These are all potential options for both the Android and iOS versions of Gallery Doctor, so don’t be surprised if the iOS version eventually sheds its download fee.

Who takes the best / worst / most photos, anyway?

Gallery Doctor is actually a great little app, one that has garnered 500,000 downloads on Android already, analyzing 35 million photos along the way. And based on this data, it has pulled out some interesting nuggets that shed some light on trends and patterns among the smartphone-using public.

According to Gallery Doctor:

Founded out of Tel Aviv, Israel, in 2012, MyRoll was rebranded from Flayvr last July, shortly after the company raised $2 million in seed funding.