Google’s Clock application for Android is gaining music alarm capabilities this week thanks to a new partnership between the search giant and Spotify. Following an update set to roll out over that time-frame, users will be able to choose from their own recently played songs, a dedicated morning playlist, or any other playlist. That song or playlist will be played automatically instead of the more standard alarm sound fare. Of course, that also means that a Spotify account is required in order to take advantage of the feature. That’s not much of a caveat, however, since it will work with both free and premium accounts so those who don’t already have Spotify won’t be required to sign up for a paid subscription. The only other requirement is that a user’s device has Android 5.0 (Lollipop) or newer installed.

Once the update from Google has landed, using the new feature is very straightforward. The Spotify options occupy a new tab within the same U.I. used to set the standard alarm sound. To get there, users will need to navigate to the ‘Alarm’ tab from the main application page and then click to create or edit an alarm schedule. A system’s default sound will be set for the alarm but by tapping custom options will load up. Those will load up the alarm sounds tab with all of the usual system installed options and the ability to add new personalized alarm sounds. However, it’s the second “Spotify” tab, located along the top-right-hand side of the page that will allow playback from the newly integrated service when an alarm sounds.

The new feature will be rolling out globally, so it should be available for use anywhere both the Google Clock app and Spotify are available. In the meantime, it’s a bit surprising that the search giant didn’t choose to incorporate its own Google Play Music or even YouTube into the clock. However, the company has reportedly spent several months juggling plans to consolidate all of its media offerings under the YouTube banner. Pending finalization of those efforts, using its own services would likely have caused more issues than anything else. There’s also no reason those couldn’t be added in the future. 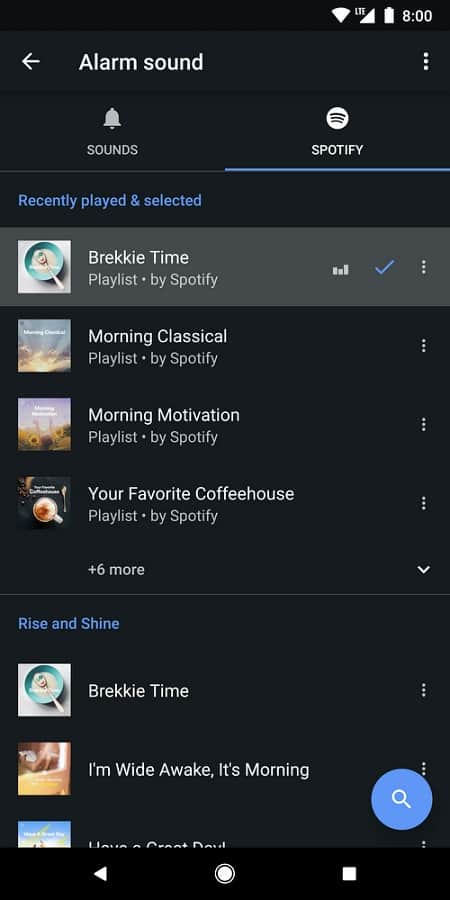