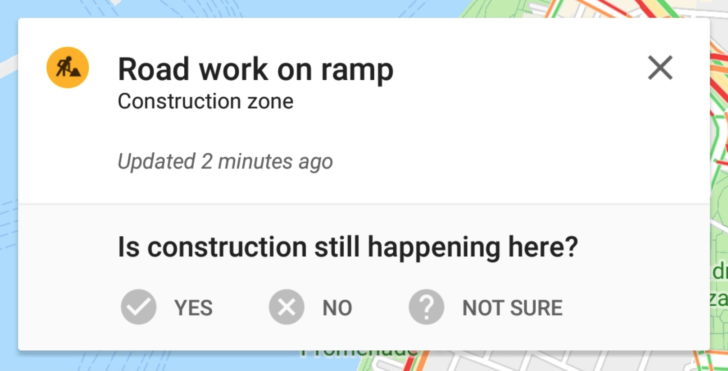 One of the main differentiators that Waze has over its competitors, including Google Maps, is user interaction. Wazers can report accidents, road closures, police car sightings, and so on, all of which helps other users out. It's what makes the app so popular. Google Maps has already pulled data from Waze for many years, though it looks like more features from it are coming.

We noted strings regarding incident reporting in our Maps v9.79 teardown. This isn't what those are, even if they're part of the same feature. The prompt has three options: yes, no, and not sure. Asking drivers whether or not a road incident is still ongoing is sure to make things more accurate for others.

We haven't gotten around to our Maps v9.81 teardown just yet, so we're not sure whether this is part of a server-side test or if it's going live for all with v9.81. However, we'll be sure to let you guys know what we find out as soon as possible. Nonetheless, it's nice to see that Google is finally integrating more Waze features into Maps five years after its acquisition.

The new feature here is the confirmation of traffic reports, not the reports themselves. We have seen evidence that Maps may allow for incident reporting in the near future, but this is not that. We apologize for suggesting that this news was of broader scope than it is.