Google Now gains offline sync for those times without internet 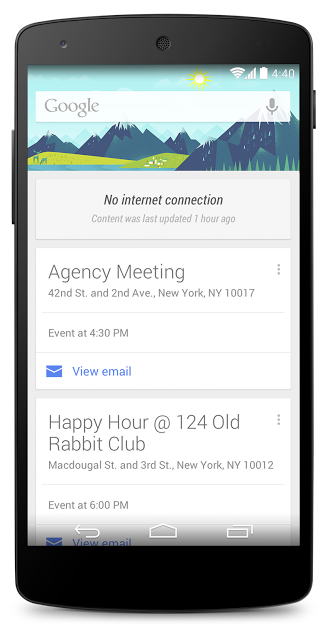 Google Now has just had a major update to the way it works by gaining an offline sync feature allowing the service to be accessed at those times when you’ve got no internet.

Now live in the Google Play Store, the Google Search App will continue to function when accessing Google Now even without an internet connection.

Next time you’re on the subway and want to check on your day’s appointments with Google Now, you won’t have to worry about lack of cell service. Starting today (make sure you update your #GoogleSearch App for Android http://goo.gl/idgt3y) your Google Now cards stay loaded, even when you lose service in the subway… or your favorite underground bar!

So hit update and enjoy Google Now wherever you are.

The post Google Now gains offline sync for those times without internet appeared first on AndroidGuys.