The Google Pixel 3 is now official, and below we've put together all of the details you need to know about the next-gen pure Android flagship phone from Google.

It has just been announced at an event in New York alongside the larger version of the series that's called the Google Pixel 3 XL. We've also had official confirmation of the new Google Home Hub and Google Pixel Slate at the event.

Google has finished its presentation, and you can find everything we learnt about the new smaller phone down below. The company has said it's "designed from the inside out to be the smartest, most useful device in your life".

The Google Pixel 3 is set to be an ideal smartphone for pure Android fans and camera enthusiasts, simply because the Pixel 2 and Pixel 2 XL were great. We hope to get our first picture as we test out the phones later today, so be sure to check back in the next few hours to read our first hands on reviews.

You can pre-order the phone now in the US, UK and Australia. You'll then be able to buy it - or if you've pre-ordered, you'll get your phone - on October 18 if you live in the US.

Those in other markets - including the UK and Australia - will have to wait until November 1.

Three, Vodafone and EE are set to range the phone in the UK with the best deal we've seen so far from the numbered network that offers unlimited data, minutes and calls for £48 a month with an upfront cost of £99.

There's a matte finish on the Pixel 3's all-glass back, and the two tone design is back. You can get it in Just Black, Clearly White and Not Pink. The white has a green power button while Not Pink has a red one.

If you've used a Pixel device before - or you've seen one - you'll be familiar with the overall look of the devices. The fact these are all-glass on the rear will probably mean it feels differently in the hand to the Google Pixel 2.

It's IPX8 dust and water resistant so you should be able to use this in the rain without it getting ruined, but there's an aluminum frame around the outside.

There's an edge-to-edge 5.5-inch 18:9 aspect ratio OLED display on the front. It's a bigger screen and better screen-to-body ratio than the Pixel 2. It's only a Full HD+ resolution, but that offers 443 pixels-per-inch.

The display has HDR support, an always-on mode and it also has Corning Gorilla Glass 5 protection from bumps and scratches too.

The dual front-facing stereo speakers are back for the Pixel 3, and this time they're 40% louder than what we saw on the last generation of Google phones. Those in the US will also get six months of free YouTube Music when you buy the phone too.

You can watch the first video of Google's new products below, including the Pixel 3.

Google is putting a big focus on the camera for the Pixel 3. There's a 12.2MP dual pixel camera on the rear of the phone that's f/1.8 aperture, but the beauty here seems to be in the processing technology that's working behind the scenes.

Before we move onto that, it's worth noting the Pixel 3 has a dual front-facing selfie camera that uses two 8MP sensors.

Back onto the rear shooter. The camera will take a burst of images when you hit the shoot button and then the AI will workout the best image to use. It's a feature called Top Shot, and it should allow you to avoid images where you've got your eyes shut or someone is slightly blurred.

This will be an interesting one to test to see if Google has got this right and it works exactly how it's presented. You can manually choose the photo you want to use, but it'll also provide recommendations of what is probably the best shot.

There's also Super Res Zoom, which is a new feature that shoots a burst of photos and then uses an algorithm to try and take the perfect shot. 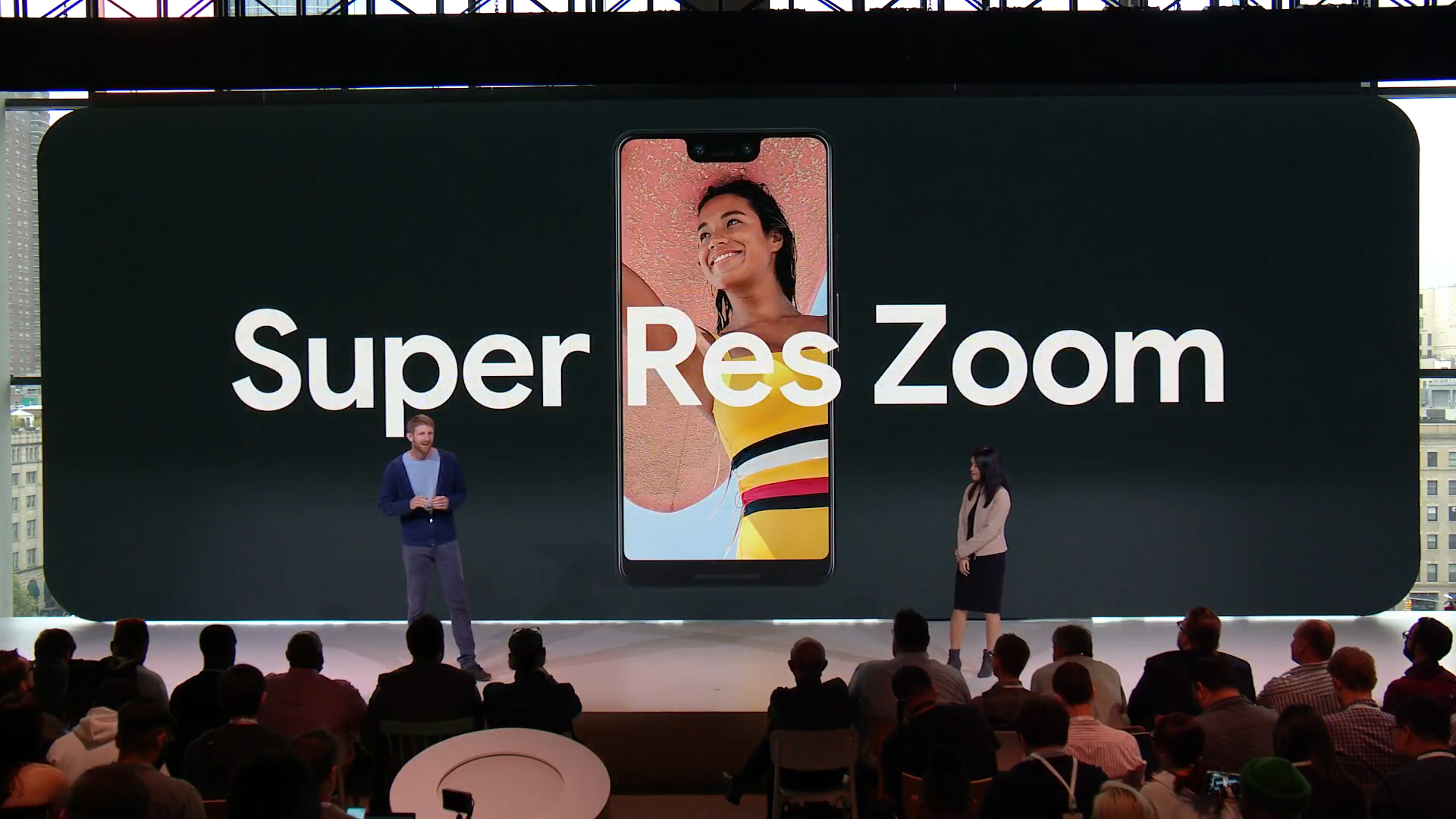 Google also reckons the camera will be much better than the Pixel 2 at low light shots with its new Night Sight feature. The aim is to help you avoid having to ever use the flash.

Machine learning chooses the colors that your shot should be finding in an image, and Google believes this will make for the best low light photography on any modern smartphone. We can't wait to put that to the test.

As for the front camera, there's a new mode called Group Selfie Cam that seems to work like an ultra-wide angle camera. Google wasn't 100% clear about how this works when it announced it on stage.

There's also a new feature called Playground that brings augmented reality features to your camera, and there's even a tie-in with Marvel that will bring Iron Man or the Hulk into your videos. If that's not your thing, there's a dancing Childish Gambino piece of content too.

Google Lens directly in the Pixel 3 camera as well. This way you can just point it at objects and it should be able to give you extra features.

An example give on stage was the way you can point it at a movie poster and Google Lens will bring through search information for the film so you can find times. It also has some shopping features too. 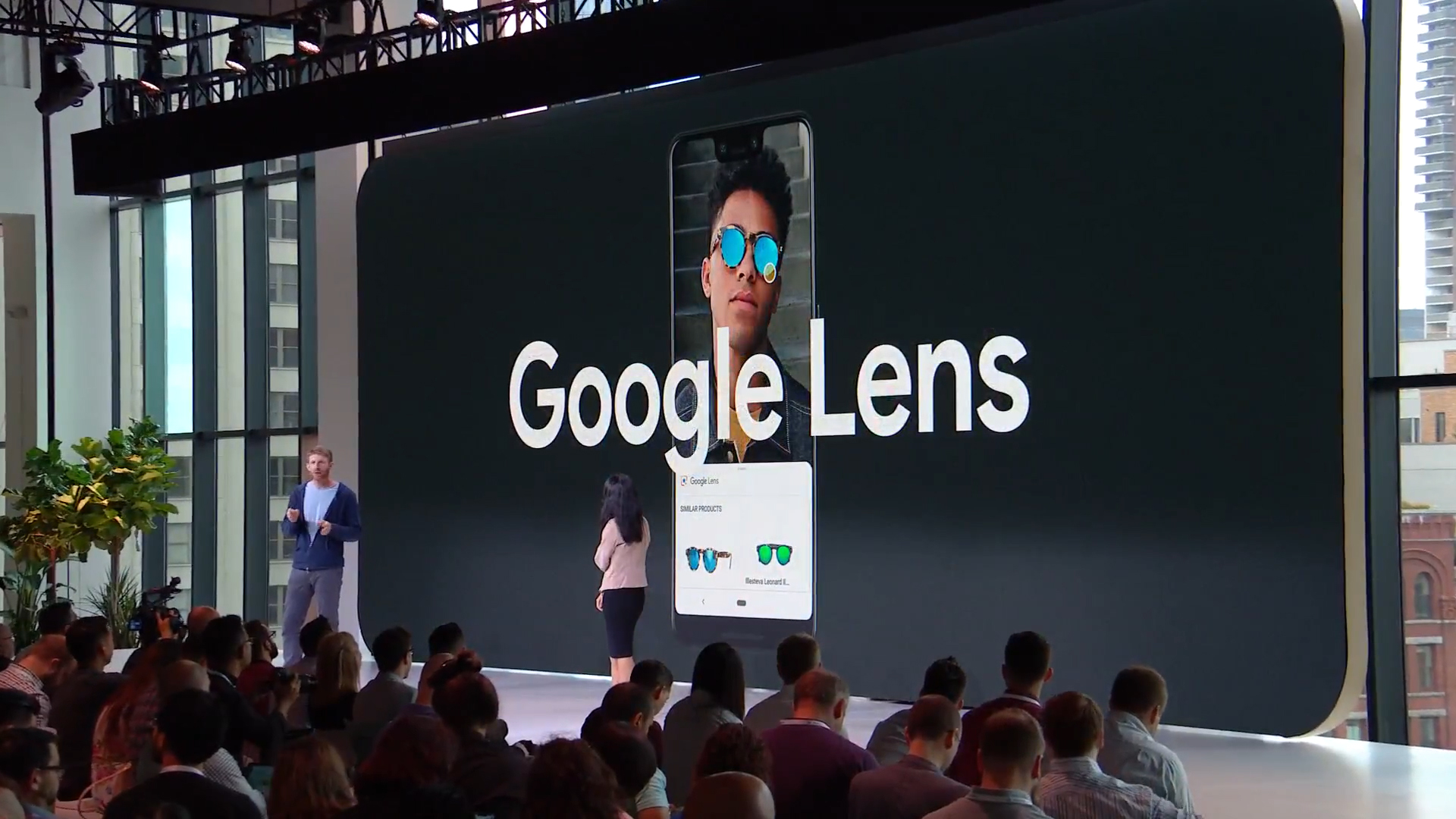 Your Pixel 3 will come with Android 9 Pie software as standard, but there are some new features coming to Google Assistant as well as a mode that can answer the phone for you.

You're also guaranteed three years of operating system and security updates when you buy the Pixel 3 or Pixel 3 XL.

One feature is called Call Screen that allows you to not answer the phone but get a message that says what was said by whoever rung. That should help you when you don't want to answer unknown callers.

There's also a feature called Flip to Shhh where your phone will automatically silence itself when you turn your phone upside down.

The phone has a 2915mAh battery inside and you'll be able to charge it with wireless charging. There's a new first-party charger called the Pixel Stand that you can buy.

It's running the Qualcomm Snapdragon 845 chipset alongside 4GB of RAM, plus you'll have the choice of either 64GB or 128GB of storage.

Check out our review for the Google Pixel 2 below: