The Google Pixel 3 XL has arrived - and it's exactly as the leaks have suggested. Coming with the huge screen and powerful camera we expected, there's a lot to take in about the firm's new flagship phablet.

The phone has been launched at the giant New York event from Google, live-streamed around the world - and it won't be long before you can get your hands on one of (what's likely to be) one of the world's best cameraphones.

The news was confirmed by UK carrier Three, which states the phones will be available in 'Clearly White', 'Just Black' and 'Not Pink'.

You'll be able to pre-order the Google Pixel 3 XL from Thursday October 11, and it'll be available to buy from November 1.

The phone has been shown off (although we think that's the Pixel 3, rather than the Pixel 3 XL) in a video by Google - it really doesn't seem to care much about leaking things before going onstage.

The camera - a single sensor on the rear - is upgraded as well, designed to take clearer photos that are closer to DSLR quality. the phone will be able to take a photo in multiple variants, giving loads of options in HDR to enable you to get the perfect snap. 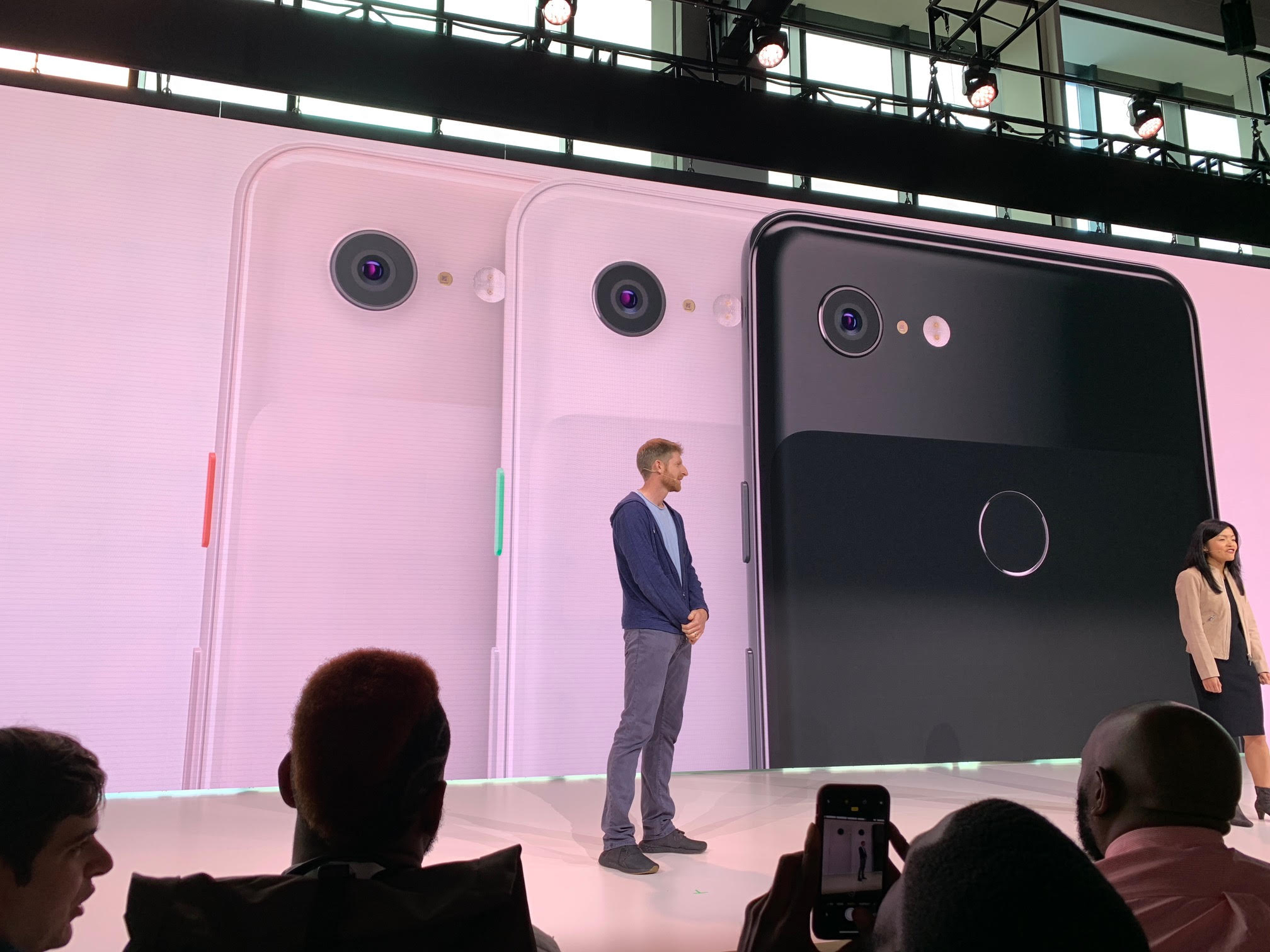 The following is from our rumors hub - keep checking back on this news story as we update it with new information as the phone is unveiled by Google.

Since its initial launch, Google's Pixel line-up of smartphones has made an indelible impression. Offering a distinct vision for a 'pure' Android experience, the line has also been distinguished by its superlative camera performance.

Though they had their quirks, 2017's Google Pixel 2 and Pixel 2 XL were solid smartphones which found popularity among mobile geeks, but perhaps didn't quite offer the wide consumer appeal the search giant may have been hoping for.

The Google Pixel 3 XL is the flagship leader to the slightly lesser Pixel 3, and we're still waiting on rumors of the first Google produced smartwatch, called the Pixel Watch.

The Pixel 3 XL has a decent foundation to build upon, but it will have to hone its all-round offering if it's going to compete with the likes of the Samsung Galaxy Note 9, iPhone XS, Huawei P20 Pro and HTC U12 Plus.

Below you'll find all of the leaks and rumors so far, plus we've put together a list of the things we'd like to see the new handset feature.

It's official: the Pixel 3 XL is here, on a date revealed by Google itself in a teaser for the phone.

You'll be able to pre-order the phone today in the US, Canada, UK, France, Germany, Ireland, Spain, Italy, Singapore, India, Australia, Japan, and Taiwan. It should be in stores on October 18.

In the past, the Pixel series has initially launched in the UK as a carrier-exclusive device, and there is no word yet on whether the search firm will pursue the same tactic in 2018.

Certainly as the Samsung Galaxy Note 9 has crept above the $1000/£1000 mark Google could have bumped prices a bit higher. Given that the LG V40 started at $900, perhaps Google wanted its Pixel 3 (which starts at $799) and Pixel 3 XL to retain a bit of an edge to the ever-climbing Android flagship phone pricetags.

Many of the leaks accurately predicted the final design, which has a large notch, a rear-facing fingerprint scanner and a two-tone back. The phone's screen has a 6.3-inch QHD+ flexible OLED at 523ppi with Corning Gorilla Glass 5.

As with other flagship phones, Google abandoned aluminum for a glass body, likely to help signal and facilitate wireless charging (spoiler: it has Qi-supported wireless charging). The back has a matte finish along most of its length to aid grip, ending with a glossy top where the cameras sit.

Originally, a promotional teaser site that Google has put up in Japan might also have been given a sneak preview of the colors that the Pixel 3 XL will be offered in. The phone image on the website cycles through three colors: black, white and mint.

However, the final launch showed the phone would come in Just Black, Clearly White and Not Pink. 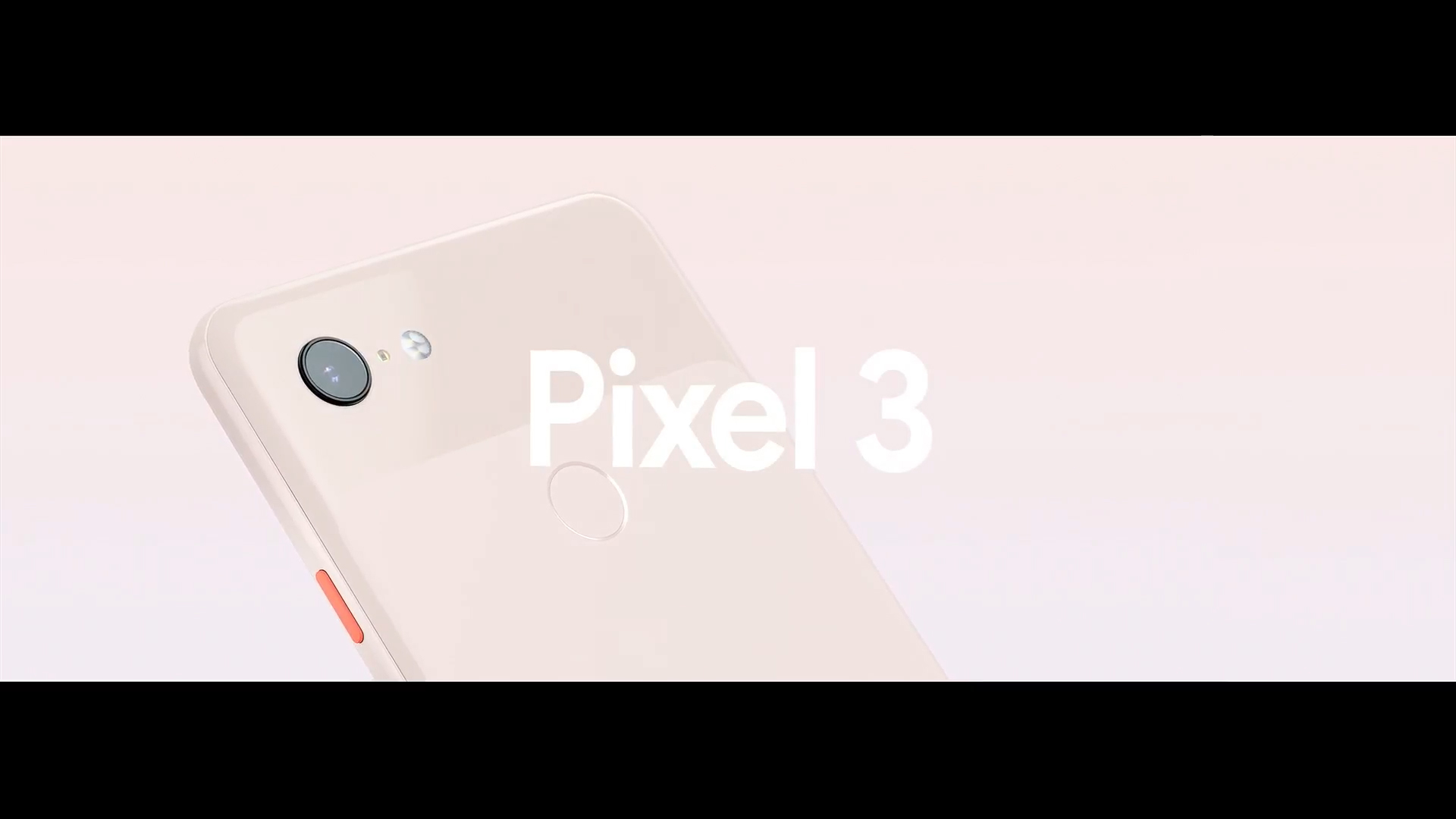 As leaks revealed, the Pixel 3 XL will indeed pack a Snapdragon 845 chipset and 4GB of RAM. That's the current top-end Snapdragon chipset, but some phones have more RAM than that.

The Pixel 3 XL will come in 64Gb and 128GB, with an appropriate price bump – but storage space is the only thing separating the two price tiers.

The Pixel 3 XL will of course also run Android Pie. Not only has that been rumored but there's really no way it would run anything else.

Unsurprisingly, the Active Edge feature from the Pixel 2 range (which lets you squeeze the sides to interact with the phone) returns, as was rumored.

In fact, we've even now seen the feature in action in a leaked marketing video, which also showed that various gesture controls and shortcuts are coming back, such as the ability to double tap the screen to wake it.

As sources claimed, one of the front-facing lenses is wide-angle (f/2.2 with 97-degree field of view) while the other is f/1.8 with a 75-degree field of view. The two lenses combined should allow for a better bokeh effect (portrait mode) as well as a rumored mode called 'Super Selfies.'

The event revealed its less ostentatious name, Group Selfie Camera, which uses the wide-angle lens to zoom out front-facing photos. During the presentation, Google claimed this allows the Pixel 3 and Pixel 3 XL to capture 184% of the scene that an iPhone XS would.

The same sources aren't sure whether or not the extra lens will allow for better facial recognition, but they claim the rear camera is great in low light and comes with an upgraded Visual Core chip that - unlike the chip in the Pixel 2 range - does more than just improve the processing of HDR+ images.

There's also been a suggestion that the camera is set to impress, as the standard Pixel 3 (which is likely to have the same camera) is rumored to have a DxOMark score of 107.

DxOMark is a respected smartphone camera review site and that score would be an increase on the 98 scored by the Pixel 2, though would still put it below the Huawei P20 Pro with its score of 109.

We may also get some new AR features on the camera, such as the ability to scan in email addresses from business cards, which is shown in the leaked video above.

Elsewhere, a magazine listing talks about the Google Pixel 3 range having a 'Top Shot' feature, designed to help you 'capture the perfect shot every time'.

The Pixel 3 XL's battery size is 3430mAh, predictably larger than the Pixel 3's 2915mAh. The rumors of wireless charging were true: both Pixel 3 phones support Qi wireless charging, which is supported by the just-announced Pixel Stand. It's a long overdue feature for the range.

Google Pixel 3 XL: what we want to see

The Pixel 2 XL got 4.5 stars in our in-depth review, so there’s still room for improvement, and adding the following features to the Google Pixel 3 XL would be a step in the right direction.

The Pixel 2 XL had smaller bezels than the Pixel 2, but compared to 2018's onslaught of almost bezel-less devices more can be done by Google.

We'd like to see the bezels on the Google Pixel 3 XL slimmed even more, allowing for a larger screen in a similar form factor. As well as looking good it will also help keep the Pixel 3 XL relevant against the likes of the iPhone 11 Plus, Samsung Galaxy Note 9 and Huawei P20 Pro.

Active Edge on the Pixel 2 XL lets you squeeze the sides to launch Google Assistant. It’s a handy feature, but unlike on the HTC U11 that’s all it does and it can’t be re-mapped.

For the Google Pixel 3 XL we'd like to see the feature to return, but we want it to be context-sensitive.

For example, if used in the camera app it would take a photo, while core functionality can be customized, so you can use it as a shortcut to whatever app or feature you want.

The Pixel 2 XL has one of the best cameras around, but we want even more from the Google Pixel 3 XL.

The trend at the moment is dual rear cameras (and in a few cases more than that), but Google stuck with a single rear snapper in 2017 and still got great results.

If Google does implement dual cameras it needs to do so with a clear reason, rather than simply just following the trend.

Google's software could still use some work. We'd like gesture controls for timed photos and the ability to switch between the main and selfie cameras with a swipe, like you can on Samsung and LG phones.

They're little tweaks, but they’d make using the camera a little faster and a little more pleasant.

4. A return of the headphone jack

Despite taking a dig at Apple for ditching the headphone jack when launching the original Pixel, Google has also got rid of it for the Pixel 2 XL, which is a decision we’d like to see reversed for the Google Pixel 3 XL.

We don’t expect that to happen, if anything ever more handsets are going to start removing the port, but for many users it’s an inconvenience and the benefits of its removal just don’t seem overly compelling.

The Pixel 2 range had reasonable battery life and supported fast charging, but didn't come with have wireless charging, which is a major omission, especially now even Apple is supporting it.

We expect wireless charging to become a lot more popular in the next year, thanks to the iPhone 8 and iPhone X, so it will stand out even more if the Google Pixel 3 XL doesn’t support it.

Once you've equipped your home and office with wireless charging pads (at admittedly, an additional cost to yourself) you'll quickly see the benefit and ease of charging your phone wirelessly.

The screen on the Google Pixel 2 XL show room for improvement. The QHD panel on the Pixel 2 XL is sharp enough, but in our review we found that the viewing angles aren’t great and nor is it especially vibrant, so we’d like to see work done to improve those aspects for the Google Pixel 3 XL.

There were also numerous complainants about the Pixel 2 XL display, including a screen burn-in issue. Google later release software updates to address some of these issues, but for the Pixel 3 XL, Google needs to learn from its mistakes and get it right first time.

The Pixel 2 XL sports IP67 certification, which means it can survive being submerged up to 1 meter deep for up to 30 minutes.

That should be plenty, but these are flagship phones we’re talking about and some rivals offer more. The Samsung Galaxy S8 for example has IP68 certification, meaning it can be submerged 1.5 meters deep for the same duration.

It’s a small change, but one that could at the very least give buyers more peace of mind that their expensive purchase is fully protected against rain and spills.