In short: Google’s as-yet-unannounced Pixel Slate Chrome OS tablet, codenamed ‘Nocturne’, has now made an appearance on Geekbench touting 16GB RAM and an 8th-generation Intel Core i7-8500Y processor. According to the listing, that’s a dual-core four thread processor with 4MB of L3 cache and, unsurprisingly, the Android version is shown as Android 9 Pie. In terms of score, although benchmarks are obviously somewhat subjective, Nocturne is comparable to a Samsung Galaxy S9 Plus. That’s the Samsung Exynos 9810 variant of the latter device. Its single core score is around 443 points higher than that handset at 3,764. Meanwhile, its multi-core score is closer to the Snapdragon version of that same Samsung device at 8,064 as compared to the Galaxy S9 Plus’s 8,185.

Background: Prior to this benchmark, the Chrome OS device has already been the subject of a substantial amount of discussion stemming from its apparent designation as Google’s first dedicated tablet on the platform. Several images have cropped up as well, primarily in what seem to be advertisements for a third-party keyboard dock manufactured by high-end accessory-maker Brydge. Setting that aside, previous speculation has also been that the tentatively-titled Google Pixel Slate would ship with a Kaby Lake processor from Intel with a minimum of 8GB RAM. However, the processor in question actually falls under the umbrella of the successor to that family of processors – namely, Amber Lake. The 14nm chip was announced and launched just this year in August. What’s more, the i7-8500Y has a maximum supported memory capacity of 16GB and the Geekbench-listed 4.20 GHz is the maximum turbo frequency rather than being the base frequency. The actual base frequency is noted by Intel as being set at 1.5GHz. Otherwise, the specs in the benchmark here line up neatly with expectations for the upper-end model of Google’s upcoming slate, expected to finally see daylight on October 9 at the company’s hardware event.

Impact: While there are a couple of unexpected details in this benchmark, it’s worth noting that benchmarks can be deceptive – deliberately or to otherwise keep things under wraps. They also only provide a general look at the performance of hardware rather than showing how well things will run with real-world usage. Bearing that in mind, these scores also don’t deviate too much from the current generation of Google Pixelbook Chromebooks with the exception of slightly higher than average multi-core scores on Geekbench. That’s not necessarily a bad thing, as those devices were already arguably overpowered for running Chrome OS and the hardware should perform very well. 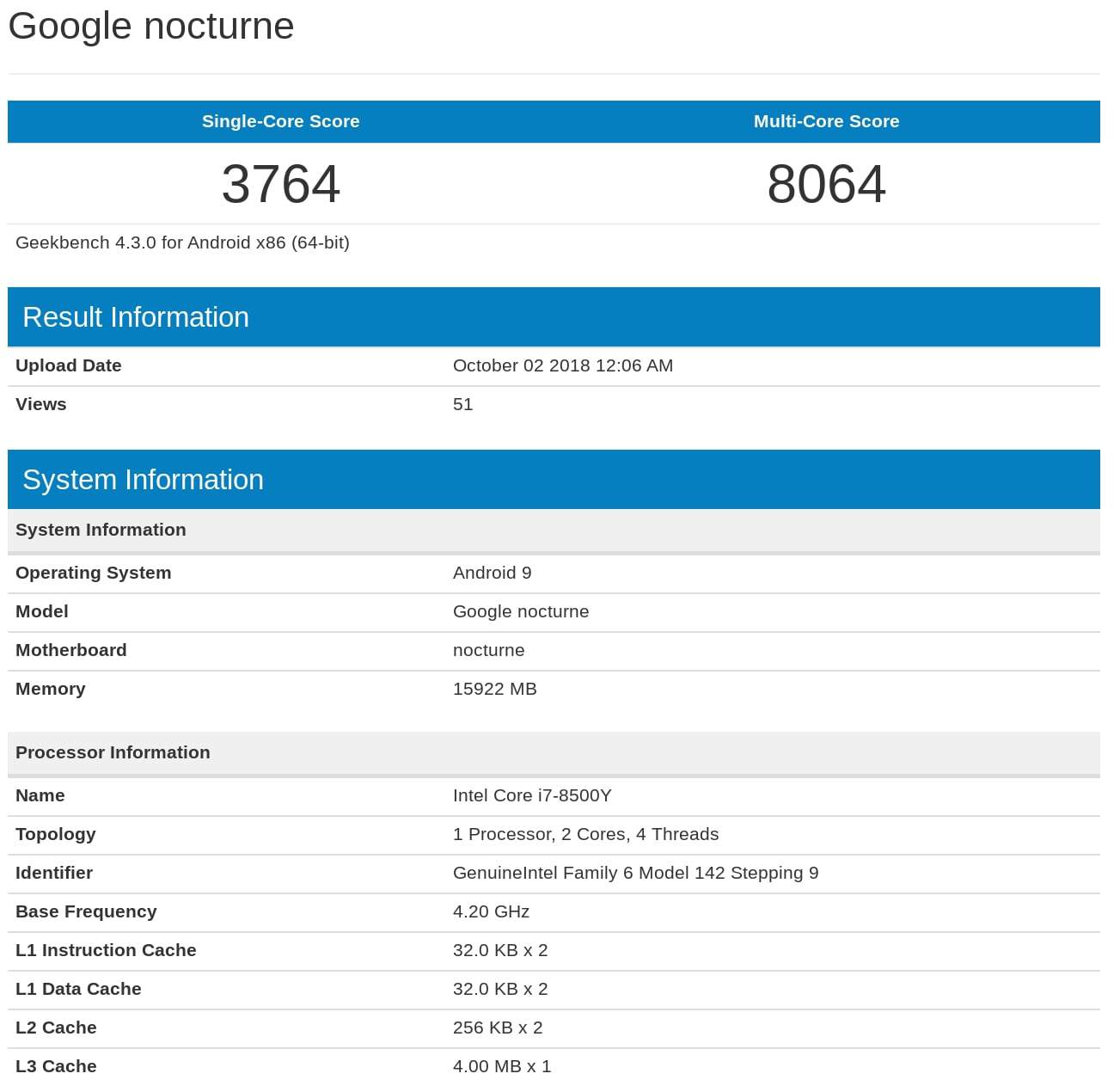