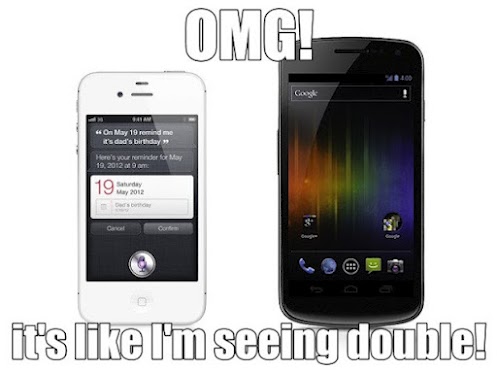 Let me see if I understand this. Google, the company that perfected web search and through it changed the lives of billions of people, must disable the local functonality from its flagship smartphone -- all because of Apple? Now do you see why about a month ago I boycotted Apple and last week called the preliminary injunction against Galaxy Nexus shameful?

Watch out. This is one Android update you don't want to accept. I asked my wife this morning: "Do you use local search on your phone?" She has Galaxy Nexus. My lovely looked up with a startled WTF looked and answered: "Yeah". Of course she uses local search on her phone. Who doesn't? You. If you own Galaxy Nexus and accept the update. It's the wrong one for Google to send out. The search giant should dispatch Android 4.1, which if, I understand correctly, changes search so that Apple's bully patent doesn't apply. C`mon, Google, you can do better.

Judge Lucy Koh issued the preliminary injunction on Friday, but Google waited until yesterday to respond -- and wisely so. Last week, Judge Koh also issued an injunction against Galaxy Tab 10.1. Samsung, which makes both devices, asked the judge to stay the ban pending appeal. Yesterday she refused, raising questions to perhaps a similar request for Galaxy Nexus is doomed to the same fate.

Google's response was swift, considering. Late last night, Android's maker let the world know that a search-on-device disabling update would come to all Galaxy Nexuses, regardless of carrier. Meanwhile, Google removed the smartphone from its online store. Galaxy Nexus is now "coming soon" with Android 4.1 for 50 bucks less than with the now-removed Ice Cream Sandwich model.

Okay, I get it, Google, but why not give Galaxy Nexus owners some Jellybean now. Last week, at the I/O developer conference, Google handed out the smartphone to attendees. I got one. It boots up to Android 4.0.4 but later prompts for 4.1 update. Google already announced that Galaxy Nexus would receive Jellybean in mid-July. Well, frak, don't wait. Don't send people an update that disables features, send one that enables them.

Of course, manufacturers and carriers stand in the way. Many are slow about dispatching Android updates. Here in the United States, Verizon supposedly ships stock Ice Cream Sandwich on Galaxy Nexus, but then drags its ass delivering updates. Exactly how long does it take to qualify a point zero one update, Verizon?

Three days ago, on Google+, I asked in comments responding to Kevin Gault: "Could defendant lawyers argue that Galaxy Nexuses Google ships with Jellybean be removed from the injunction? What irony, if the win bit Apple's butt by reducing fragmentation -- Sprint and Verizon rushing to Android 4.1".﻿

The next day, Google released the newest data on Android. In the 14 days before June 2, 10.7 percent of the phones accessing Google Play had Android 4.x -- small number considering the OS launched in October. The install base doesn't move forward fast. But what if Apple's injunction changed that, with a mad rush to Jellybean?

If I were Samsung, which hasn't yet faced final judgment on Galaxy S III, qualifying Android 4.1 for July release would be top priority. And whoa be it to Apple if the unforeseen consequence reduced Android fragmentation, which would increase competition. Let me tell you, having used iOS 5 and Android 4.1, Google's OS makes Apple's look like, well, Windows XP to OS X Lion.