Google has announced a new Google Wallet update that should make a lot of people happy. For starters, you will now be able to send money to anyone who has an email address (and are older than 18 years of age, of course). Google’s also opening up the ability to send money through Gmail on desktop to anyone who sends money through the Google Wallet app, which is pretty darn sweet. 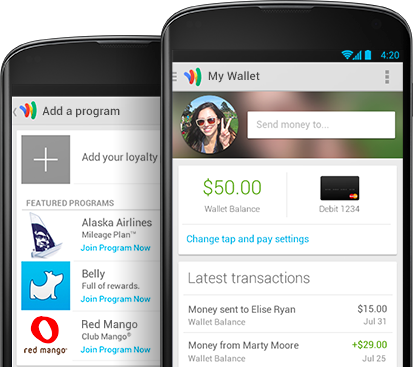 New loyalty programs have been added to Google Wallet, with Alaska Airlines, Belly, and Red Mango allowing you to add your loyalty cards to Google Wallet. You simply bring the digital card up on your phone when you want to scan it, and proceed just as if you had that old finicky plastic card. Furthermore, Google has announced the forthcoming addition of many new businesses:

There’s no set date for when we can see any of these, but they’re coming. And to cap off the loyalty rewards stuff, the app will now notify you when you’re nearby one of the places you’re a member (just in case you needed a reminder to spend even more money to get even more rewards).

Other things you can expect are full, easy access to all of the offers you’ve saved (whether you got them from within Google+, Google Maps, Google Search or what have you), the ability to see all your purchase activity (whether they were online purchases or completed at a store using NFC), and more.

Google has announced that the phone will be rolling out to “all” Android phones with Android 2.3 or higher. The Google Play Store might still be currently blocking many previously unsupported devices, but that should change as the Play Store changes propagate to everyone over the course of the week. Go ahead and give the newly-updated app a spin in the Google Play Store.