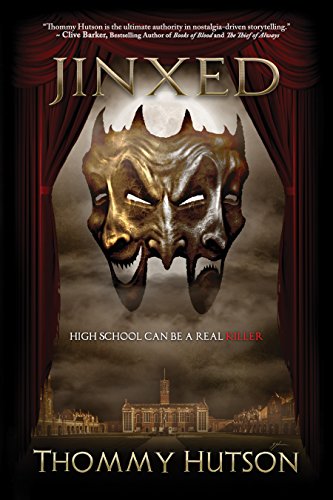 “… a gore-filled throwback to the classic teen slasher flick genre … Graphically detailed descriptions make it clear that this work of horror isn’t for the faint of heart.” ~Publishers Weekly

“… a Must Read for Classic Horror Fans … an expertly paced, cinematic slasher in a setting that would make Agatha Christie proud. Inevitable and shocking. Brutal and beautiful. Homage and originality. Comedy and Tragedy. Thommy Hutson could easily take on the mantle as the next Lois Duncan…”  ~Waylon Jordan, iHorror.com

“Thommy Hutson is the ultimate authority in nostalgia-driven storytelling.”  —Clive Barker, Bestselling Author of Books of Blood and The Thief of Always

“Jinxed is the teen whodunit that Wes Craven and Lois Duncan never made. Hutson has created the best new slasher franchise since Scream.” —Peter M. Bracke, Author of Crystal Lake Memories: The Complete History of Friday the 13th

“A dark, tension-filled thriller that’s wicked to the very end. Bad luck was never so much fun!” —Jeffrey Reddick, Creator of Final Destination

Walk under a ladder

Step on a crack

But someone at the Trask Academy of Performing Arts is taking things one deadly step further when the campus is rocked with the deaths of some of its star students.

Layna Curtis, a talented, popular senior, soon realizes that the seemingly random, accidental deaths of her friends aren’t random—or accidents—at all. Someone has taken the childhood games too far, using the idea of superstitions to dispose of their classmates. As Layna tries to convince people of her theory, she uncovers the terrifying notion that each escalating, gruesome murder leads closer to its final victim: her.

Will Layna’s opening night also be her final bow?