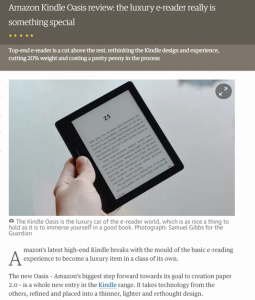 TeleRead’s in-depth coverage of the $290 Kindle Oasis e-reader is continuing, with Len Edgerly‘s hands-on review later today—and my own this week.

Editor Chris Meadow will also check out the Oasis first-hand, when his review unit arrives (I’ve bought my Oasis).

Got questions for Chris and me, so our reviews can be most helpful? Our comments area awaits you. And if Len scoops us with answers, that’s fine.

In addition, this week, I’ll also post some thoughts on the Oasis and the glories of trickle-down technology, a far cry from trickle-down economics. Tech alone is not the answer to the digital divide. But it won’t hurt.

The Guardian: “A cut above the rest”

Meanwhile the Guardian has weighed in with a five-star Oasis rave. The headline is Amazon Kindle Oasis review: the luxury e-reader really is something special, and the subhead reads: “Top-end e-reader is a cut above the rest, rethinking the Kindle design and experience, cutting 20% weight and costing a pretty penny in the process.”

“The screen is excellent, with text looking sharp and clear and easily readable in all conditions,” writes Technology Reporter Samuel Gibbs. “With the backlight on around level 15 the text appears to almost float out from the screen, with the matt black bezel disappearing from view…

“The basic Kindle reading experience is excellent with a choice of seven typefaces, including Amazon’s own Bookerly and Amazon Ember, which are specifically for screen reading. The font can be adjusted through eight sizes—from really quite small to very large—while line-spacing and margins can all be adjusted.”

While concluding that the Oasis isn’t for most people—not at $290—Gibbs write: “Reading the Oasis was the least tiring on the eyes I have experienced, even more comfortable than the excellent Voyage.” Perhaps the additional LEDs for front lighting helped.

As I’ve noted here and here and elsewhere, this gold-plated machine lacks a font weight adjuster, unlike the rival Kobos, so if you’re in your 50s or above and perhaps could benefit from a somewhat bolder font, you’re out of luck so far. But given Amazon’s record for responsiveness to customer demands, I’m hoping for an eventual fix through firmware. I’ve been requesting one for years. Sooner or later, however, I think it’ll happen. Len, best known as host of the Kindle Chronicles podcast, is optimistic. Of course, my Oasis review will be based on a bunch of criteria and will keep in mind that most customers won’t care about the absence of a font weight adjuster or a bold off-on switch.

In the battery life department, Gibbs writes: “Without the battery cover the Oasis has a rated life of seven hours reading. With the battery attached it will last for 28 hours between charges, which take three hours via microUSB. The battery case charges the internal battery of the Kindle too, at a rate of 1 hour of reading per 10 minutes attached to the case.

“During my testing, with data connectivity on and the brightness set to level 15 I managed to read 200 pages or around 6 hours without the battery case before getting a warning that only 10% battery was left. With the battery case attached I could easily have read two, maybe three books under the same conditions.”