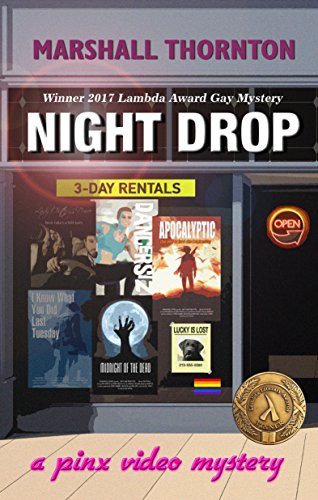 – Learn More
Text-to-Speech and Lending: Enabled
Follow author Marshall Thornton on BookGorilla
Don’t have a Kindle? Get yours here.
Here’s the set-up:

It’s 1992 and Los Angeles is burning. Noah Valentine, the owner of Pinx Video in Silver Lake, notices the fires have taken their toll on fellow shopkeeper Guy Peterson’s camera shop. After the riots end, he decides to stop by Guy’s apartment to pick up his overdue videos, only to find Guy’s family dividing up his belongings. He died in the camera store fire—or did he? Noah and his downstairs neighbors begin to suspect something else might have happened to Guy Peterson. Something truly sinister.

The first in a new series from Lambda Award-winner Marshall Thornton, Night Drop strikes a lighter tone than the Boystown Mysteries, while bringing Silver Lake of the early 1990s to life.

“The murder/mystery plot unfolds beautifully as Noah and his neighbors Marc and Louis plus their friend Leon uncover possible police corruption and hints of blackmail; the story kept my interest every page of the way.” — CrabbyPatty, Gay Book Reviews

“The characters are wonderful, the dialogues are extremely good and it has THIS WOW-effect at the end. When you think you know everything, lean back and are prepared to get your quiet sweet ending, the author dropped that bombshell.” — Lena, Gay Book Reviews