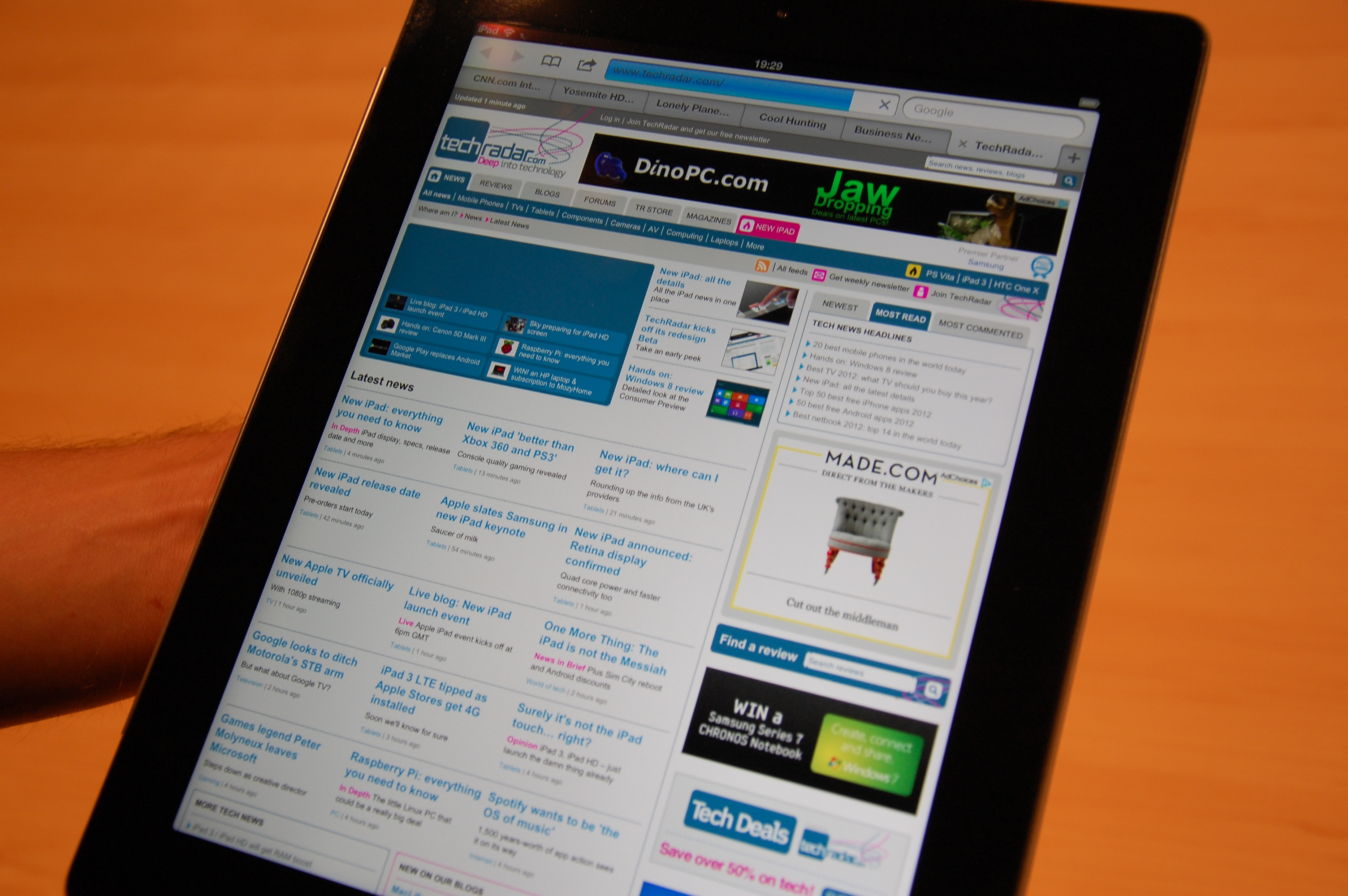 Much of the pre-launch talk was about what the new iPad would be called – but Apple cut through that with the slightly odd decision to call it simply the 'new iPad'.

Whether this brings confusion, especially with the iPad 2 being kept on sale as part of a range, remains to be seen, but moniker aside; this was an update that brought a wealth of goodies for technophiles and enthusiasts.

Apple's iPad 2 launched in March 2011 to a huge fanfare, bringing a whole host of improvements and a thinner, lighter form-factor, but not the heavily tipped HD 'Retina' screen that the iPhone 4 had brought.

This time around Apple has decided the time is ripe for a brighter, sharper screen with a much higher resolution, and the impact is clear to see.

That higher resolution is 2048x1536, less than the Retina screen on an iPhone, but designed to be held slightly further away, so Apple has plumped to keep the Retina name because you cannot, in its words, see the pixels at that distance.

The actual real-life impact of the improved display is the standout feature of the new iPad; it's crisper, sharper and a genuine and immediate pleasure to use because of this.

Just browsing through photos in the new iPhoto app is enough to leave the most hardened of screen nuts smiling.

It's genuinely beautiful – and a huge step on from not only its now cut-price predecessor, but also many of its Android rivals.

The impact of a new screen even on everyday tasks like browsing is impressive. The resolution shift makes ebsites sharper and easier to read, and lessens the need to zoom in on text.

Even with the full TechRadar site on screen the words are clear, making the whole experience nicer

Another major headline is the arrival of an A5X processor with quad-core GPU, making the iPad a hugely powerful device that is quite capable of dealing with hugely complex computational tasks.

Its predecessor was already perfectly capable of dealing with the vast majority of the everyday needs for a tablet user, but the injection of even more capacity could see a big spike in what applications can offer.

Expect even more from games on the platform, and a noticeable change in the speed with which the device performs its tasks.

We spent a little time with the dreadfully named, but beautifully visual, Sky Gamblers Air Supremacy. You can swoop through the air in stunning visuals and the processor is powerful enough to manage it with not even a hint of stutter.

Apple suggested in the launch that people said they preferred gaming in an iPad – and while we are not going to suggest that we agree with this – the enhanced resolution means that this will not disappoint those used to the visuals on a PS3 or Xbox 360.

It is games like that this that best show the progression of the new iPad over the iPad 2 – the changes may have been predicted, but the overall impact on the device is genuinely impressive.

With 1080p movies now available the screen also comes into its own in terms of media playback. The clips we saw of film Tintin were lovely although the resolution is obviously less than the screen is capable of.

There is the odd downside - the new iPad is thicker and heavier than its predecessor, although it's not a huge difference in the hand.

We also can't be too gushing about the transcription built into the device; in a noisy press room the device simply could not intepret our words so we'll be aiming to give that a proper workout in a less difficult environment.

Our first impressions of the camera for photography and video were good - but again not in the best of environments to give it a proper test - something we will be doing as soon as possible.

Although we're keen to look at a few things more closely - the transcription, the dimensions and the fact that the unit we were losing was running pretty darn hot - this is a tablet that impressed us hugely on its first showing.

With a wealth of wonderful apps, a more powerful processor, far superior connectivity and a better camera, this is already a step up.

But it is that display that makes the new iPad stand out from the crowd. It's a beautiful, welcome addition that takes this device back to the top of the tablet tree, and it is likely to bring a massive slice of business to an Apple store near you.